A warning. Two movies with the same title were released this year. The other, oddly, is also an anthology, based around the idea of people telling each other stories. Really, what are the odds? That one is directed by Conrad Glover and  Mark Stephens, was apparently made in Las Vegas and, so you know, opens with a ritual sacrifice. It’s a feeble, low-budget offering with bad acting, poor writing and limited production values.

It is, however, still better than this. 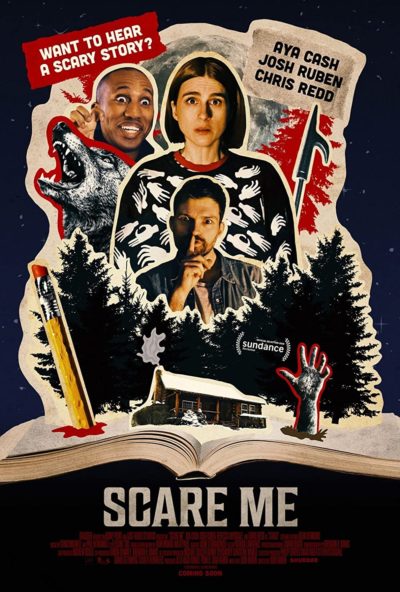 Scare Me is probably going to end up fighting it out with the Black Christmas remake for the title of worst film, in any genre, I have seen this year. Considering the competition includes The Room, this is quite some achievement. Well done, Mr. Ruben. You must get up very early. How can I summarize this cinematic treat? Imagine an hour and 40 minutes of improv, put on by two people from the freshman class of the gender studies course at your local community college, and directed by a guy who has seen The Shining way too often. Now imagine something less entertaining than that. If you wanted to get a federal law passed to stop people from writing, directing and starring in the same movie, this film would be Exhibit A.

Fred (Ruben) is an aspiring writer, who rents a cabin up in the Catskills to work on his horror concept, involving werewolves and revenge. There, he bumps into Fanny (Cash), who has the temerity to be not just far more successful and a better writer, but also (gasp!) a woman. Despite the fact she’s an arrogant prick – let’s just say Cash’s other character, Stormfront from The Boys, was more sympathetic, and she was a psychotic Nazi – Fred and Fanny end up spending the night in Fred’s cabin, acting out their story ideas. But this ends up bringing out Fred’s inner Jack Torrance. Which would be okay if Ruben was Stanley Kubrick. He’s not. He does, however, pose a triple threat, in that he can’t write, can’t direct and can’t act.

It’s not just the sexual politics that make this such a grind, even though it’s as unsubtle there as an Alexandria Ocasio-Cortez campaign rally. [Chris, whose political views couldn’t be more different from mine, was also thoroughly unimpressed] I guess part of the point is that Fred isn’t a very good writer, and his stories reflect this. Yet that doesn’t make them entertaining to watch – and Fanny’s stories are little if any better. The main problem, however, is the execution. While having an anthology where the segments are acted out by two people in a cabin is a fresh concept, there’s a reason no film has taken this approach before. That’s because it’s an idea so terrible. it should have been strangled at birth.

This is a complete failure, and Ruben seems to realize the fatal corner into which he painted himself, In the later stage, he randomly throws in a pizza delivery driver, Carlo (Redd), who joins the pair for a bit, before leaving, having served no apparent purpose. Though Carlo does take part in the musical number. Yes: a musical number. The film should have been titled Kill Me, because it’s what I muttered at that point. One of the problems with horror-comedies is striking a balance between the two disparate genres. This film doesn’t have a problem there: it sucks equally much as horror and comedy. The only person who comes out of this with any credit, is Fred’s taxi-driver (Drysdale), and I suspect that’s largely because she doesn’t appear in the middle 90 minutes of the film.