“New folk horror” seems to be A Thing in the genre over the last few years. I must confess to being largely uninterested in it: I haven’t seen the likes of Midsommar or The VVitch. On the evidence of this entry… yeah, I’m good. It takes place in 14th-century Wales, which is not exactly a place anyone in their right mind would want to go. Wales, that is. In this particular era, it’s worse than usual, being plague-stricken. The village priest (Meredith) blames local weird girl, Alice (Acock) for the infection believing her to be a witch. After running through the usual trials, e.g. water, fire, does she weigh the same as a duck, she escapes into the woods and finds shelter with a hermit, James (Carlsen), and we gradually find out the truth about Alice’s self-imposed silence. But the villagers send the Cleanser (Nehan) after her, and we’re not talking Jean Reno or even Harvey Keitel here [hey, what’s a letter S between friends?] They really should have let it lie… 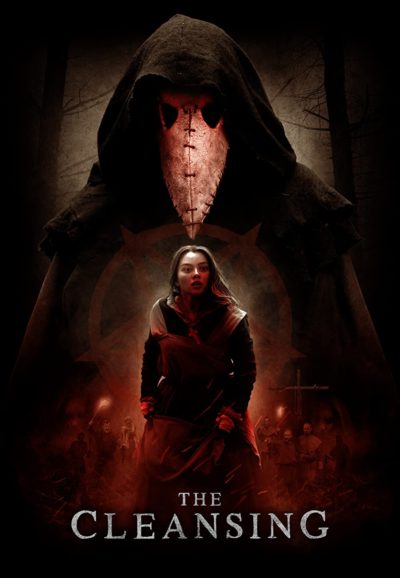 If you like watching scenes of people sitting around in the forest, talking, you’re going to love this. For it’s fifteen minutes of action, and eighty minutes of chat. Much of it is superfluous to the plot, and appears to be an attempt to build the characters of Alice and James in particular. I can’t say I found it too successful, though Acock’s performance is decent, and the reason for her decision to forego speech is an interesting one. Otherwise though? It more or less goes round in a circle for the middle hour, as we wait for the villagers to suddenly realize there’s still a witch roaming the woods, and hey, the plague hasn’t gone away either. James seems to be a bit of a medieval version of the Unabomber, possessing a lethal white powder that melts faces off when mixed with water, and is also into psychoactive drugs. Meanwhile, there’s some suggestion Alice might actually have the occult powers feared by the priest.

While these elements are potentially interesting on their own, the script is never able to get them to come together to be more than broodily atmospheric. I kept waiting for something – anything! – to happen of note. I thought we were finally going to see it, when a foreign trader shows up, suddenly and without explanation. Nope. He leaves the film as abruptly as he arrived, and despite suffering from the plague, the character appears to serve no purpose. It’s not until the Cleanser arrives, that the film stirs from its contented hibernation, and this was too late for me. Maybe following the Cleanser, in a Witchfinder General way, would have made for a more interesting story? I should have realized though, with writer David Shillitoe also being responsible for the similarly wood-bound and dull, Boudica: Rise of the Warrior Queen. Or, as I described it, “Boudica: The Moping About the Forest Years”