H. Rider Haggard’s novel, She: A History of Adventure, was first published in 1887, and has never been out of print since. Even at the time this movie was released, it had already sold 83 million copies in 44 languages. Those are numbers which can only have increased since, despite sniffy recent tendencies to disparage it as “Imperialist literature”. According to Wikipedia, there have been no less than eleven movies inspired by the book, beginning with the Georges Méliès one-minute “trick film”, The Pillar of Fire in 1899. That was limited to a woman dancing in flames; the Hammer adaptation does go rather further in terms of telling the story. Though had it just been 106 minutes of Ursula Andress cavorting fierily, I might have been okay with that.

It begins just after the end of World War I, when three men are in the Middle East, figuring out what to do with their lives. There are two officers, former Cambridge lecturer Professor Horace Holly (Cushing) and Leo Vincent (Richardson), plus their batman, Job (Cribbins). Leo has a bit of a wandering eye, and is lured out into the streets by a bit of local totty, before being knocked unconscious. He wakes to find himself in an luxurious house, where he meets Ayesha (Andress), who gives him a map and a ring, telling him to follow the former to see her again: “Everything you desire will be yours. Power, riches, glory.” [And, it’s implied, Ayesha’s vajayjay.] Leo convinces his pals to join him on the expedition, and they eventually reach the lost city of Kuma, over which Ayesha rules. And has for 2,000 years, since she acquired immortality after bathing in the cold flames of a sacred fire. 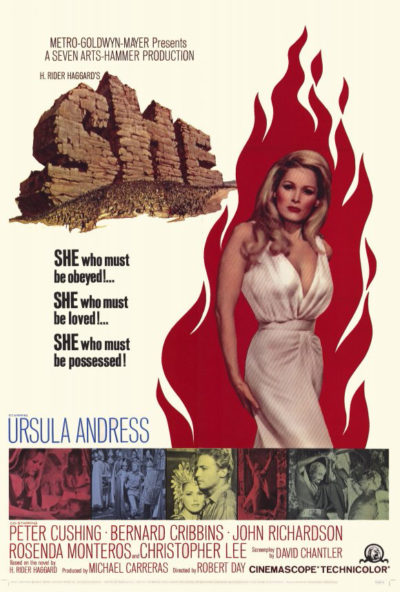 In a plot-thread that’s quite reminiscent of The Mummy, it turns out Leo is the spitting image of the priest Kallikrates. He was Ayesha’s lover until – and this is probably what I’d call a warning – she stabbed him to death after finding him with another woman. She now wants Leo to go through the sacred flame and join her in immortality. However, he, perhaps remembering the golden rule about not putting your dick in crazy, is a little bit unconvinced. Not least, because he’s still seeing the local gal, Ustane (Rosenda Monteros – Mexican rather than Middle Eastern, but hey, foreign totty is foreign totty, am I wrong? She was in The Magnificent Seven!). When Ayesha finds out, she’s not too happy about his two-timing, and her subsequent actions imperil just about everybody.

There are parts of this which work really well, and it’s a cut above most Hammer films in terms of production values. They clearly didn’t shoot this one in their usual Home County stomping grounds, or even the South of France (whose frequent use had me wondering if Sir James Carreras had a holiday home in the area). They went to Israel for the exterior shots, which may well have been the furthest the studio had ventured from Bray to this point, and definitely get their money’s worth. There is also some decent matte painting work, on the approach to Ayesha’s queendom, and the sheer numbers in the cast also feel significantly more than usual. All of which explains the budget reaching £323,778, the most they had put into a film to that point. But it was worth it, the film taking close to twice that in the North American market alone.

Cushing and Cribbins are also great [the following year, they would re-team in another mentor-sidekick pairing, for the non-Hammer Daleks’ Invasion Earth 2150 A.D., in which Cushing played Time Lord Doctor Who and Cribbins one of his companions]. While their master-servant relationship is very much of its time, it’s one of an easy familiarity with which both men are content – witness the early scene where they join in with the belly-dancers. Job has some lovely, gently sardonic lines, e.g. “Do either of you gentlemen know anything of the Arab laws of trespass?”, or when Holly suggests finding a lost city might get them all knighted: “Just imagine, sir, me stepping into the George and Dragon. ‘Half o’ bitter,’ I’d say. ‘Oh, yes, Sir Job,’ they’d say. ‘Coming right up, Sir Job.'” Mind you, I’m not sure how great a servant he is, given this is his reaction to being told he has “The last water until we get to the mountains.” 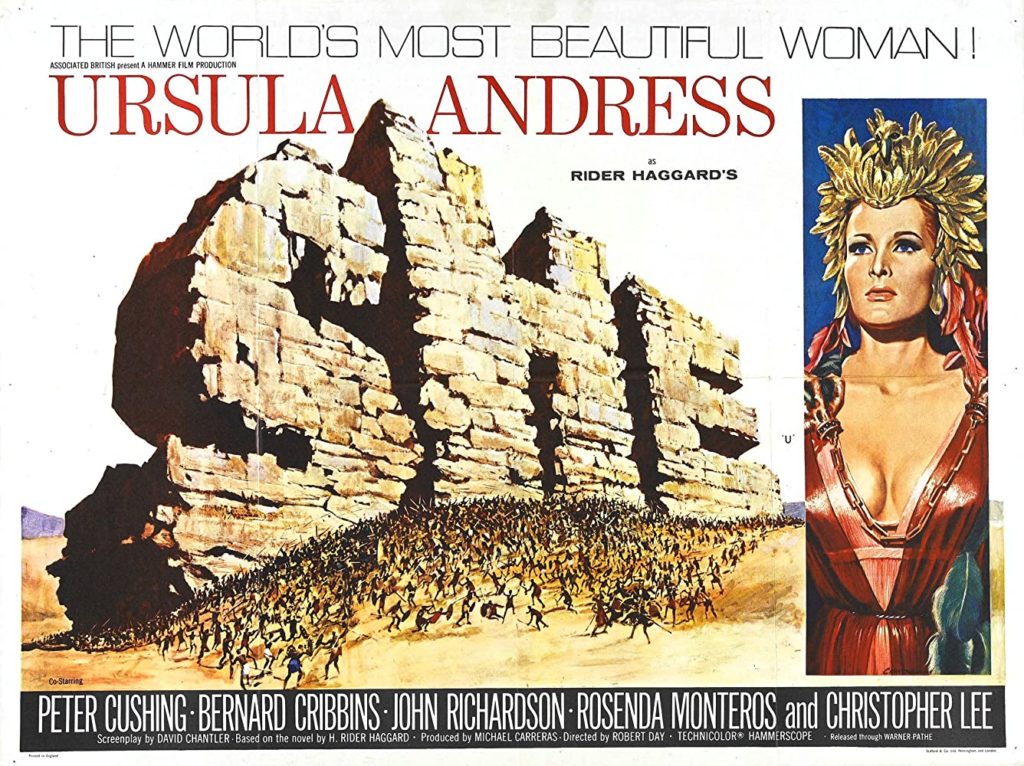 Not so great? That would be Andress and Richardson. The former does have a bit of an excuse, in that immortality, after a couple of thousand years, could possibly generate a severe degree of world weariness and ennui. That certainly comes over in her performance: as in Dr. No, while her… ah, visual side was fine, all her lines were dubbed by renowned voice (re-)actress Nikki van der Zyl. Richardson, meanwhile, is just another example in the ongoing series of blandly uninteresting Hammer young male leads, though at least in this case, he’s a blandly uninteresting Englishman, rather than an American. There’s absolutely no indication of chemistry between Leo and Ayesha, rendering the relationship at the core of the movie implausible, and their repeated scenes of suck-face are awful to watch. Christopher Lee, in another pseudo-ethnic role as high priest Billali, is severely wasted, his jealousy against Leo coming out of nowhere.

There are pleasures to be had here, certainly – they just come around the fringes, rather than from the main story. For example, Ayesha’s Giant Pit of Fiery Doom, into which she hurls those who have displeased her. As can be seen in the photo at the top, it’s nice that they keep this roped off when not being used for hurling purposes. Because, y’know, safety. I fondly imagine a sign hanging somewhere in the depths of Ayesha’s palace: “It has been 262 days since the last Giant Pit of Fiery Doom accident.” Taken in that spirit, or appreciated for the obvious influence it had on the likes of Indiana Jones, this is probably better than on its own merits.