The ninth incarnation of our horror spectacular should have taken place at Sun Studios of Arizona this weekend. Of course, COVID-19 had other ideas for it – along with just about every other convention since March. We did think about just canceling it, but in the end, decided to do something radically different. The entire event has now been moved online. Yep, the whole kit and kaboodle: feature films, shorts, panels, workshops and entertainment will be taking place for ticket holders through the dedicated FearCon site on festivee.com.

This offers some significant advantages. Firstly, the event is able to extend, both geographically and temporally. It’s no longer accessible just to people in the vicinity of Phoenix: almost all the content is available worldwide (a couple of the films did want to be region-locked, which we kinda understand). And it’s no longer a case of everything being crammed into one weekend, with the site being live from October 16th, through the end of the year. From a con-goer’s point of view, this means you can take it at your own pace this year, rather than rushing about, trying to figure out what to see, and making difficult decisions when the program has, say, a panel and a film you both want to see, scheduled against each other. And for 25 bucks? Can’t beat that!

From the point of view of the people behind the curtain, it has its advantages too. All the work here gets to be done ahead of time, meaning that we should not be running around like the proverbial blue-arsed flies for three days, shotgunning energy drinks, and reaching the end thinking “Thank fuck that’s all over.” It will, however, be weird, sitting quietly at home on Sunday, knowing the event is going on in cyberspace without us. Well, that’s the theory. We’ll see how the technology works in practice: I think Chris and I are both a bit nervous, since this is entirely uncharted territory for us. The test runs seems to have been good, but I think we’ll have Festivee support on speed-dial for the next couple of days!

As festival film co-programmer, it was nice to be free of time constraints as well. When it’s an event only lasting a day or two, we always end up with more content than we have room for, forcing us to make difficult decisions, and leaving very good films, shorts and features, out in the cold. Not this time. We were able to program no less than twelve features (more or less one each weekend of the event) and four, ninety-minute programs of short films. Trying to cram that into a weekend would have been… challenging. It also lets us showcase the whole breadth of what goes into the “horror” genre. We’ve got everything from extreme, B-movie grindhouse to a three-hour werewolf romance. Truly something for everyone. As long as, y’know, they like horror.

As they come out as part of FearCon 2020, over the next couple of months, we’ll be posting our reviews of 11 of the 12 features below [the exception being The Horror Crowd, which is a documentary, something I don’t typically cover here]. There are also reviews of three films which were submitted to the event, but for one reason or another – mostly because they didn’t quite fit even our broad definition of horror! – they did not become part of the final program. 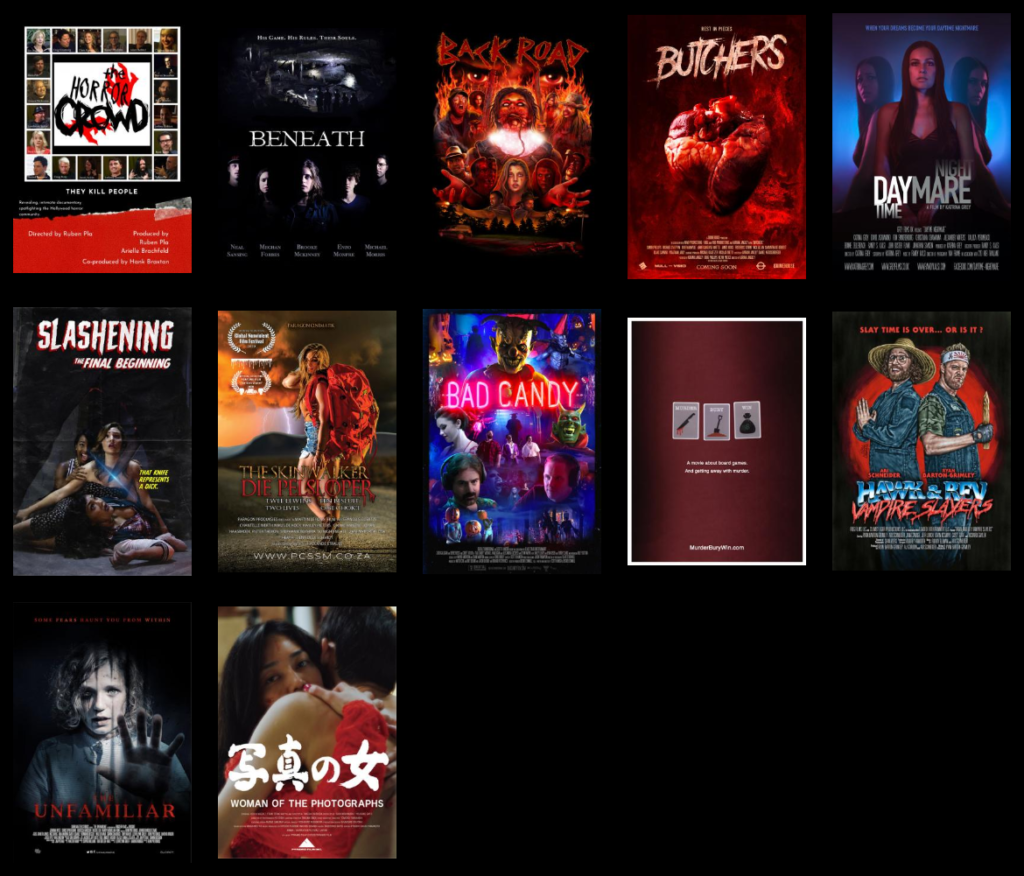