If Simon Pegg and Edgar Wright had decided to go after vampires, rather than make zombie classic Shawn of the Dead, the results might have resembled H&R. There’s the same core concept, of two buddies, facing an unexpected and horrific threat, for which they are woefully ill-prepared. Though it’s fair to say this skews much more heavily towards the comedy side of the scales. Hawk (Barton-Grimley) is an ex-soldier, kicked out of the army after stabbing a fellow soldier, whom he swears was a filthy vampire. Now living in a tent and working as a security guard, he sees two pasty, blood-smeared characters leading a gimp on a chain into a storage unit. Hawk reckons there’s only one explanation: more filthy vampires. 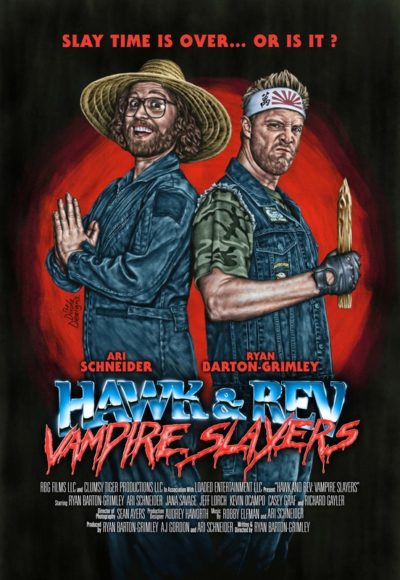 Of course, convincing anyone else won’t be easy, especially given a long record of wild, though well-intentioned, calls to the cops. His long-time hippie pal, easy-going groundskeeper, Rev (Schneider), agrees to help, providing Hawk vows there’ll be no violence used. And mystery writer Theo (Savage) joins the team after meeting the pair, when they try to buy ten gallons of holy water from her day job at a religious supplies store. It’s clear there is someone going about the town of Santa Muerte, committing a series of highly messy murders, crimes about which the local police are oddly unbothered. Is Hawk on the right track – either deliberately or by complete accident? And are he and his pals truly ready to face off against the perpetrator of the bloody killings?

Right from the start, we’re plunged head-first into an almost continuous stream of eighties consciousness, cult movie references (Fright Night is the most obvious inspiration, filtered through the lens of Kung Fury) and oddball characters. This, however, is very clearly Hawk’s world – everyone else is just living in it. To be honest, it’s probably not somewhere I’d want to live permanently. You could make an argument the hero here is mentally ill, an odd subject for broad comedy, though the obvious affection for the characters defuses much criticism. Still, for an 85-minute visit, it’s hard to deny the movie offers a lot of fun, particularly in the dynamic between Hawk and Rev, which is surprisingly endearing.

You do need to be in the right mindset for the often surreal humor the movie has to offer, otherwise, it could well fall completely flat. In this, it feels a bit like Napoleon Dynamite, a film that took me two attempts before I “got it”. Schneider’s similarity to Jon Heder, both in character and physical appearance, strengthens that comparison. It’s also fair to say, some of the zanier elements failed to work for me, and Theo’s presence seems entirely pointless in narrative terms. However, when it works – such as the vampire yanking limbs off his prey, complete with a running commentary by the victim – it tends to work quite splendidly. I can’t recall the time I last laughed out loud so often at a film.