“All right, but apart from the sanitation, the medicine, education, wine, public order, irrigation, roads, the fresh-water system, and public health, what have the Romans ever done for us?” I have to say, right from Patrick Allen’s over-dramatic voice-over, I had difficulty taking this seriously. Less due to Life of Brian though – despite the quote above, which did come easily to mind in one scene. I was getting more a strong whiff of Carry On Cleo, released three years earlier. This has a similarly cheap and entirely inauthentic approach to history: the difference is, it’s not a comedy. Well, not intentionally, anyway. There were definitely points at which I laughed. Or, at least, sniggered.

Part of the problem may be that there recently have been several recent TV series depicting pre-Norman Britain, such as Vikings, The Last Kingdom and (the most direct comparison in terms of era) Brittania. While not without their flaws, these show that the genre does not require shitty production values and shoddy scripting. Though The Viking Queen’s most renowned gaffe – a wristwatch wearing Roman soldier, as gleefully reported by several sources – appears to be the stuff of cinematic urban legend. At least, no screen shots exist to verify the supposed anachronism, something which should be very easy to take. That such a mistake is plausible for this movie, still says a lot, and the myth certainly does a reasonable job of setting audience expectations. 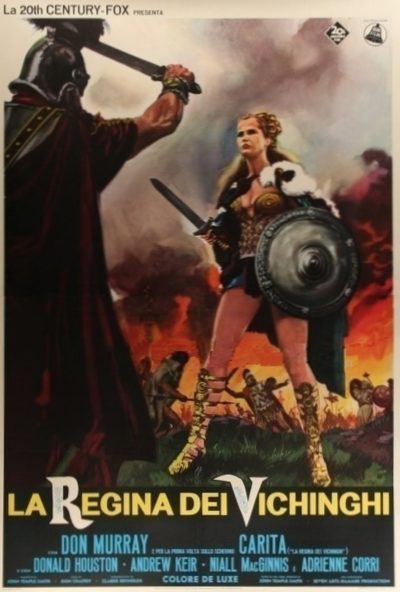 It is a very loose adaptation of the legend of Boadicea, perhaps with elements of Shakespeare’s King Lear thrown in – for no good reason except to increase the local totty quotient. On his death-bed, the leader of the Iceni tribe bequeaths the crown to middle daughter Salina (Carita), in joint rulership with Roman leader Justinian (Murray). He’s not the problem, being reasonable and relatively fair. But on the one hand, you have the local druids, under Maelgan (Houston), who are unhappy with what they see as collaboration. On the other, are the hardline Romans, led by Octavian (Keir), who see no reason to share power with the natives at all. As Salina and Octavian fall for each other (literally, as we’ll see), violence increasingly looms. And after some Roman atrocities, the Iceni have had enough and break into open revolt.

The problems start, most obviously, with the title. For there were no Vikings in England until well after the Romans departed, and even that was several centuries later. Wikipedia attempts to claim, “there is another meaning of the word ‘viking’: a raider or plunderer, of which there are many such characters in this film.” However, the film does expressly refer to Salina’s Viking mother. It seems far more likely Hammer simply didn’t give a damn about historical accuracy. For if they did, they probably would not have had Maelgan the druid offer up prayers to Zeus, a thoroughly Roman and entirely non-Druidic god. The line about her mother may have been inserted to explain away the lead actress’s quite noticeable Finnish accent.

The presence of Carita Järvinen, to give her full name, feels like Hammer were trying to capture lightning in a bottle again. It seems they hoped to create another international sex symbol, as they done with Raquel Welch the previous year in One Million Years B.C., even to the extent of certain publicity shots echoing Welch. While her performance here is okay – at least, she wasn’t dubbed over, like many Hammer Eurototty (or Welch herself!) – it didn’t seem Järvinen’s heart was in it. She had previously had a successful career as a model, but had rejected a role as a Bond girl in From Russia With Love, and also declined a six-figure sum from Hugh Hefner to become a Playboy centrefold.

Still, her looks were enough to got her a five-year deal with 20th Century Fox. After turning down the first movie offered, a science-fiction script, she was contractually obliged to accept the next, which was The Viking Queen. It was her only leading role: she had a daughter shortly afterward, and basically rejected  every role offered, including the part in Octopussy which eventually went to Maud Adams. She’s still alive, lives back in Finland where as of 2018, she was a director of the Protect Natura 2000 conservation project. And, it must be said, still looks pretty good for her mid-seventies. 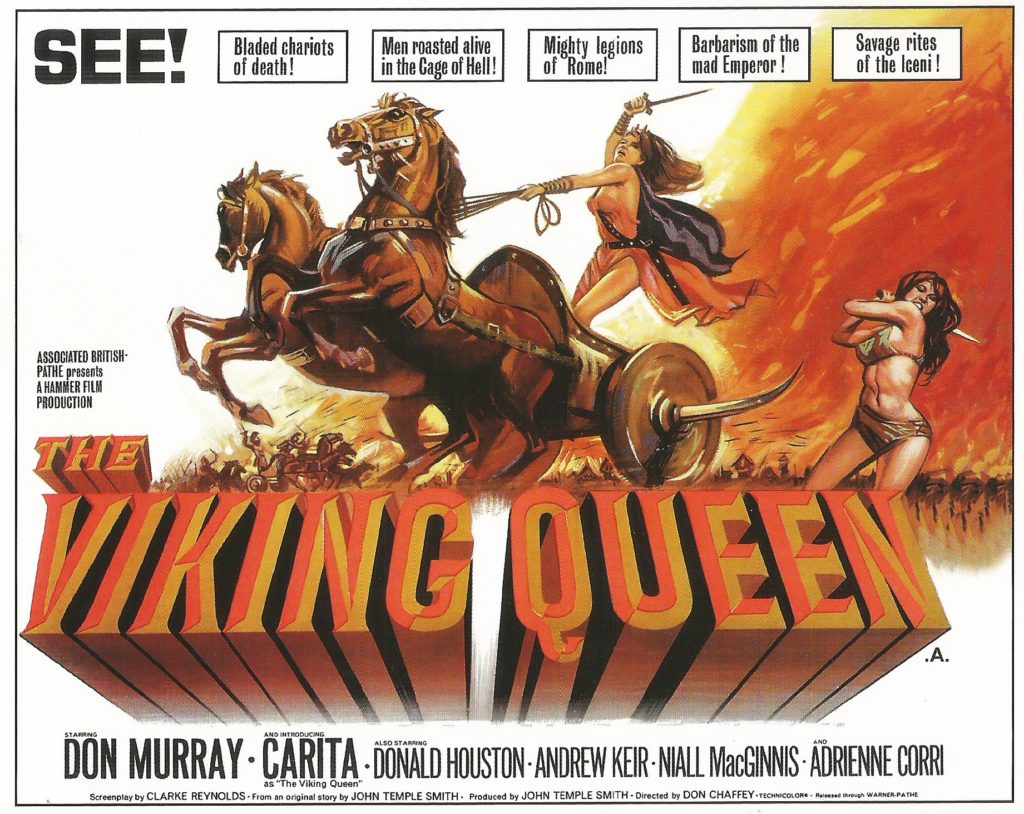 Hers was not the only questionable accent, with Murray’s American one no less noticeable. He had earned an Academy Award nomination for his role opposite Marilyn Monroe in 1954’s Bus Stop, but seems ill at ease as the romantic lead here. Nothing illustrates this more than the ridiculous scene where Justinian and Salina race their chariots, a contest which ends with both of them flying into a marsh. This, for some reason, triggers passionate necking – and the emphasis is on necking, since it’s painfully obvious there is no mouth-on-mouth action going on. Still, given the muck with which both actors are drenched, perhaps health and safety insisted on this. After all, that’s how you catch typhoid ‘n’ stuff…

Mostly though, it’s just painfully dull. Houston tries to enliven things with an outrageously shouty and hammy performance, that only goes so far. Patrick Troughton is in the cast too, but even he seems distracted. He apparently was asked to become the second Doctor Who while shooting this in Ireland. Troughton’s initial response was allegedly, “Quite preposterous. Quickest way to make it die a death!” Though the first sentence describes the movie he was shooting equally well. There’s no impact to the violence, and despite copious side-boob, the salacious elements have not aged well. This reaches its low in the obviously Caucasian Nita Lorraine playing a Nubian slave: not just blackface, but also blackarms, blacklegs and blacktits. Not the high point in make-up artist Charlie Parker’s career.

I wrote a couple of weeks back about Hammer’s forays into history. I’ll admit to having forgotten this one, but Viking Queen is so loose it barely deserves to be considered in that category. It’s a bit of a shame. There have been several attempts over the year to tell the story of Boadicea, which is definitely an idea with potential. Yet I can’t say any of them have been wholly successful, mostly foundering on the epic scale needed to do her saga justice. This certainly comes up short there, and the other elements are mostly as deficient. Contrary to what the British poster above suggests, I would have to recommend, “Don’t see”…