The translated title here is a bit misleading. When it showed up, Chris turned to me and asked, “Is this a science-fiction film?” It’s an understandable conclusion, its English name hinting at some kind of alien flick. Or perhaps echoing 1983 horror, Of Unknown Origin, in which Peter Weller fights a mutant rat. It’s neither. The Spanish title refers to the comic-book stories which tell how superheroes come about – Peter Parker’s encounter with a radioactive spider, for example. These are, by definition, NOT unknown, so how we got here escapes me. The relevance of the concept to the movie, is that someone is going round Madrid killing people in accordance with these origin stories, drawn from the Golden and Silver Age of comics. 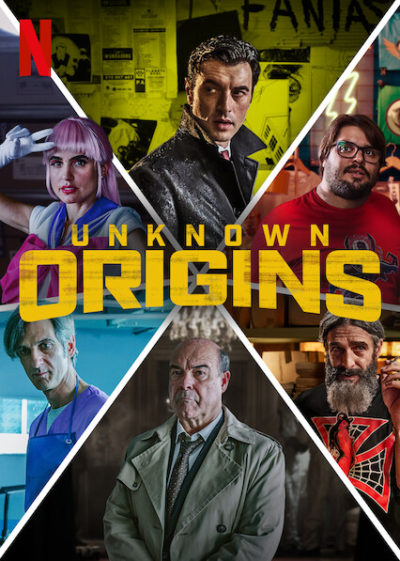 Investigating these crimes is David Valentin (Rey), who has no time for comic-books, superheroes or any of that shit. Naturally, he gets paired with a “special advisor”, comic nerd Jorge (Efe), who could not be more stereotypical if he tried, right down to the noisy munching of Doritos. His boss (Echegui) isn’t much help; but then, she does anime cosplay in her spare time. As the bodies mount, David and Jorge have to find the killer. And things are definitely getting too close for comfort, when we learn that twenty years earlier, David’s parents were killed by a mugger on their way home from the movies… [Any genre fan will yell out the relevance of this, probably before Jorge does]

It’s a novel genre mash-up that initially does a good job of balancing the two sides, while poking affectionate fun at the prejudices they have against each other. It is, of course, wildly implausible, yet the tongue in cheek approach sustains the weight for much of the crisp 96-minute running time (Jorge complains about the number of potential methods, at one point musing, “If only it was based on the seven deadly sins, it would be a lot easier”). However, in the final third, when the villain’s motivation is revealed, it ends up becoming more or less what it spent the first hour mocking: a superhero origin story. While well enough set up, it’s still awkward to bring them off the page and into the real world, especially accompanied as it is, by the inevitable supervillain. It definitely doesn’t have the budget to pull off the final confrontation, though the obligatory post-credit scene was nice.

Still, it’s held together for the most part by the performances, which are universally solid and likeable. We recognized Echegui from her role in Fortitude, and her portrayal of an utterly unapologetic fan-girl was refreshing. These are the kind of characters with whom it’s a pleasure to spend time, and I could easily see this being remade by an American studio, or potentially being turned into a TV series. The ending is positively begging for a sequel, certainly. Though maybe it’s best not to go back to a well which, as Marvel and DC have shown, will run dry sooner or later.