This is heavy, cloying horror, that hangs like lead on the viewer and likely leaves them feeling they were wading in quicksand. I can’t deny the effectiveness, in that it succeeds in what it set out to accomplish. However, I’m not convinced the results are worth the effort. It’s almost entirely a two-hander. Philip (Harris) is a children’s puppeteer, with a dodgy reputation for reasons that are left deliberately vague. He returns, bearing the freaky spider/human puppet of the title, to his childhood home by the sea in Norfolk. There, his stepfather Maurice (Armstrong) lives in squalor. But it offers no respite for Philip from his mental issues, rooted deep in childhood trauma. A missing teenage boy suggests, in fact, the past may be repeating itself. 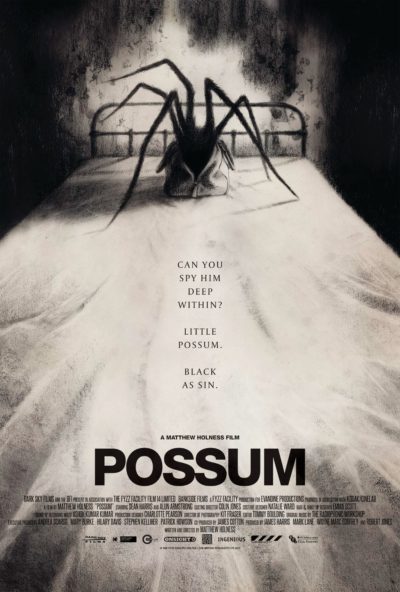 I can’t complain about the consistency of tone Holness has generated either. It’s an ugly depiction of an ugly topic, depicted in a muted palette of browns and yellows, and accompanied to good effect by a soundtrack from the legendary Radiophonic Workshop. The performances are no more appealing: Philip’s expression perpetually looks as if someone had just killed his puppy. Initially, it seemed likely the puppet represented his dark side – its face is clearly modelled after the actor. Philip repeatedly tries to get rid of the creature, or destroy it, yet it keeps turning up, just as you can’t simply delete part of your psyche. Yet there’s more going on, such as the room in the house which Philip is scared to enter, and the end of the movie shines some grim light on past events, that caused me to reconsider what had gone before.

I was reminded of David Cronenberg’s Spider. That was also a grim and intense depiction of mental illness, in a society which is both unprepared for, and uninterested in dealing with it. Both have similarly intense central performances. This is probably even more introverted: outside of stepfather and son, there are hardly any other characters in the film. Almost everything here seems weighed down with grim relevance, whether it’s a jar of candy, or Philip’s journal cum sketchbook, filled with sketches and poetry Tim Burton would reject as too relentlessly dreary. It all makes for a difficult character, one to which it’s hard to relate, and with which it’s hard to empathize.

For example, Philip simply needs to stand outside his old school to get chased off by a teacher. Frankly, I can see why, such is the degree of intense creepiness he projects. Adding to my sense of detachment, for much of the running time, I wondered if Maurice existed at all: he never interacts with anyone apart from Philip. The film may be too successful for its own good, repeating itself when it’s not needed, on its way to a conclusion that explains, rather than excuses, what has gone before. This is a movie which has to be respected, considerably more than it can possibly be liked. However, it’s a grim, depressing path, which I can’t say I found enlightening. It’s definitely one I have no interest in walking down again.