A little while ago, I reviewed Cold Light of Day, and noted the circumstances which had delayed my seeing it by almost thirty years. They involved its producer, Richard Driscoll, and his wretched movie The Comic. During writing that, I discovered Driscoll was still making films, and decided to check out this effort, on the basis that he surely had to have learned something over three decades. Well, there’s good news and bad news. The good news is, it was worth every penny I paid to see it. The bad? That would be zero pounds and zero pence. In Driscoll’s defense, he did spend some of the time since The Comic in prison for VAT fraud, which likely played into the delay between the shooting of this, back around 2011, and its release. 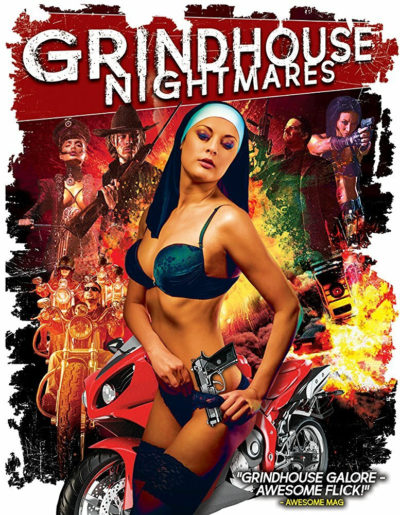 The IMDb lists it at 86 minutes, though the one I saw was a mere 71. Oddly, I am more than fine with this, not least because even in this abbreviated form, Driscoll is recycling old footage. The first story in this “grindhouse double-bill” [please take those quotes as both in bold and underlined] is Manhunt, in which Steve Munroe is chained up and tormented over his mobile phone by a Jigsaw-like captor (Anderson). It includes footage from The Comic, which also starred Munroe. Meanwhile, after the intermission, it’s time for Stripper With a Shotgun, starring Bliss and using footage cut from Driscoll’s previous feature, Eldorado. Somehow, the cast included Brigitte Nielsen, Caroline Munro, Daryl Hannah, Steve Guttenberg and Rick Mayall. The majority of them are also “credited” here, though in most cases, don’t blink.

The people genuinely involved in this are Quigley and Michael Madsen. The former is the “host”, sitting in a cinema and dressed as a bloody nurse, because… Nope, I got nothin’. She is clearly reading her lines off cue cards, held down and to the left from the viewer’s perspective. Her character interrupts both features in a way I imagine was intended to evoke Elvira, but feels more like you are watching this with your elderly aunt, who suffers from dementia. Madsen appears in one of the trailers between the two ‘features’, for something called Pulp Faction. This is an idea which surely was at least a decade past its sell-by date, even back when this was shot.

Most of this is wretched at a clinical level. Manhunt in particular is excruciatingly tedious, and coming on the heels of Quigley’s cue-card delivery, made me feel this was heading for a rare F grade. Things did improve somewhat, though only in a relative way. I genuinely laughed at one of the fake adverts, for an insurance company. The trailer for Nazi Bitches Must Die is so utterly inept and tasteless, it’s near-perfect (all that’s missing there is perhaps genuine concentration camp footage – it does have genuine Hitler footage). And, for all Stripper With a Shotgun‘s flaws, it does have a stripper, with a shotgun. You can’t argue with that.

You can, however, argue with the IMDb budget, allegedly $1 million. That seems as accurate as the running time, and I’m estimating it is $990,000 too high. If it’s a further thirty years before I see another Driscoll product, I won’t probably mind.