Though not a formal Lovecraft adaptation, there is definitely an H.P. vibe to this, with its story of a mysterious book that appears to have the ability to warp time and space. It comes into the possession of low-rent private eye Luke Harding, after he accepts a high-paying commission from dodgy local boss Mr. Fairweather (Frewer) to deliver it, only to be ambushed on route by thugs belonging to the book’s previous owner. The rule, however, is that once you have started reading the book, you keep it, and the only way out for Luke is to keep going until you reach the end. However, the further he goes in, the further he gets from “reality”, with the artifact literally taking on a life of its own. And since Luke is also having to handle the unexpected return of his teenage daughter (Hickson), the threat posed is no longer just to himself. 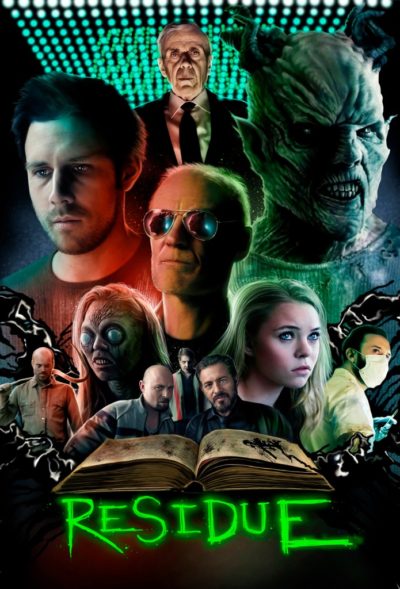 This kind of thing is quite difficult to pull off, as the audience increasingly grows unwilling to trust what they’re seeing, when it may or may not have any basis in reality. However, Nixon does a pretty decent job of bringing us along for the ride. He is indeed yanking the carpet out from under the viewer. Yet he does so to his main character as well, for example, the disconcerting moment when Luke discovers he apparently made ninety attempts to start reading the book. I can’t say it all made perfect sense: there are elements, such as the creepy, worm-like creature which starts roaming the apartment complex, that are never fully explained. Meanwhile, the ending smacks too much of a facile, “love conquers all” conclusion to pass without comment.

Yet in general, even if this was the kind of film where you simply hang on for the ride, it managed to retain our interest without issue, possessing enough outrageous and twisted elements to keep going. Probably the most extreme of these is the character who gets his head blown apart with a shotgun… yet continues to have a speaking role in the film. [Admirably, the FX look like they are almost all practical] Again, if you need an explanation for this kind of thing, you should probably stay away from this film. But if you’re happy to shrug your shoulders and acknowledge that, sometimes, weird shit happens, you’ll be well-paid for your tolerance. It’s a combination of Lovecraft and almost film noir, with a hard-boiled gumshoe getting out of his depth. All it needs there is a leggy dame, since his daughter doesn’t quite qualify.

This is a film which will end with you wanting to see more. Not that it finishes in a cliff-hanger, fortunately; it’s more a case of one portal closing and another, with horrific potential, opening. There’s definitely scope for a franchise, tracking the path of the book through owners past, present and future, and I’d not mind at all.