For a time, beginning in the mid-Sixties, Amicus were probably the closest thing to a rival in the horror film genre that Hammer had. Smaller in scope, and without the big ties to American studios, they still used a lot of the same names, on both sides of the camera. While they had made films like Dr. Who and the Daleks, they were best known for their anthologies, of which we have one example here. Beginning in 1965 with Dr. Terror’s House of Horrors, directed by another Hammer regular, Freddie Francis, and running until 1974’s From Beyond the Grave, these typically would have three or four short tales, joined with a wraparound segment. 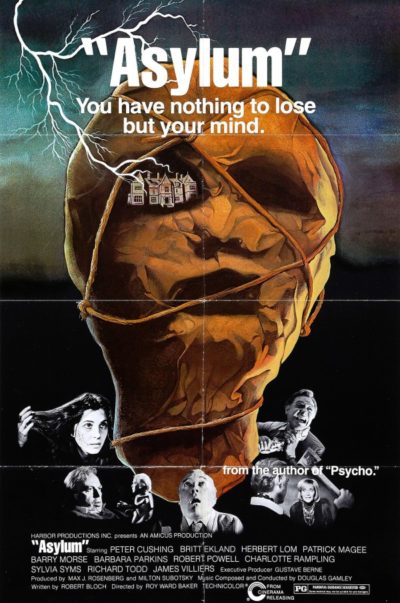 In this case, that concerns Dr. Martin (Powell), who is applying for a post at an asylum for the incurably insane. The current boss, Dr. Rutherford sets him a test: previous employee Dr. Starr is now one of four inmates, having split off a new personality. Dr. Martin has to hear their stories and identify the physician. Their tales are what form the film’s core. First is ‘Frozen Fear’, in which a woman is stalked by a dismembered body. Then there’s ‘The Weird Tailor’ – though it’s less the tailor (Morse) who is weird than his customer (Peter Cushing), who commissions a suit with unusual properties. Third up is ‘Lucy Comes to Stay’, in which a recuperating woman (Rampling) has a friend visit – or does she? Finally, connecting back to the start, is ‘Mannikins of Horror’, where Dr. Byron (Herbert Lom) is experimenting with soul transference into robot/dolls.

The four stories are written by Robert Bloch, who also wrote Psycho, though the preponderance of dolls and other animated entities make it feel like a Charles Band production. What’s nice is that they all work at the intended length: most would be problematic as features, though ‘The Weird Tailor’ has potential. Each section makes its point, provides a mild dose of creepiness, and then gets out of the way. Don’t like one? No problem, there’ll be another along in 15-20 minutes. The performances are all solid; even Britt Ekland, not exactly a noted thespian (well, when required to do more than writhe against a bedroom wall), is decent. Cushing, of course, leads the way. But Bayldon, who had just finished playing 70’s kids’ TV icon Catweazle, makes a good impression as orderly Max, who just seems a bit… off.

The main issue is, it feels about ten years past its sell-by date, being extremely tame, even by the standards of its time. By now, Hammer were embracing considerably higher levels of sex and violence, but this hardly even feels like it justifies its current ’15’ rating from the BBFC. As horror goes, it’s very weak sauce – to be honest, I think I laughed considerably more than I got chills. The score, which makes heavy (if impressive) use of Mussorgsky’s Night on Bare Mountain and Pictures at an Exhibition, and the performances can only take us so far. There’s almost nothing here which could cause sleepless nights, to anyone except an over-sensitive eight-year-old.