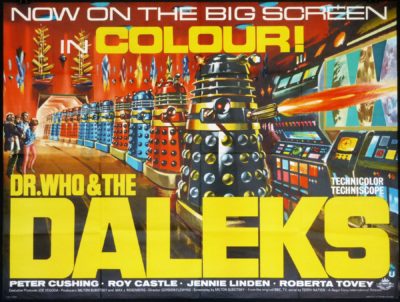 The revival of Dr. Who by the BBC, beginning in 2005, has been one of the most spectacular successes of recent years. It resurrected a series which had, for all practical purposes, been dead and buried since 1989 – the previous reboot, in 1996 with Paul McGann, having been a one-shot TV movie flop. But McGann wasn’t the only person to play the Doctor outside the well-known regulars from the series. Indeed, if you add in Comic Relief spoof, The Curse of Fatal Death, and the list includes Richard E. Grant, Joanna Lumley, Rowan Atkinson and Hugh Grant – all of whom would have been interesting choices as the permanent incumbent.

Back in the 1960’s, Peter Cushing played the Doctor in two spin-off movies. The potential here was huge: after all, Cushing had already become the canonical Baron Frankenstein and Van Helsing, as well as, arguably, Winston Smith and Sherlock Holmes. The concept of him playing a stern, Frankenstein-styled Doctor appealed enormously. Unfortunately, that’s not what we got: rather, the words “disastrous misfire” come to mind, particularly for the first movie.

I can’t categorically state this is not due to my expectations having been radically revamped by the new series. Much as I loved Tom Baker growing up, I haven’t dared watch any of the earlier series since we fell in love with the reboot – it could be a disaster, in line with the re-viewing of Blake’s 7, which only succeeded in shattering forever, my fondly-held teenage illusion that it was a good programme. Certainly, it seems likely the sixties Who was aimed more directly at kids, not the general audience for the new version. But even so… Sheesh, this is pretty bad.

And it’s bad, right from the opening credits. Excuse me, where is the Dr. Who theme? Y’know – OOO-weeee-ooo… Instead, we get some smooth jazz, over which it was just about possible to fit the “real” theme, if you hummed it loudly. And, trust me, we did. When we get to the Doctor, things get even worse, for he is simply a doddery old human, reading a comic in his arm-chair. Hello! Alien? Two hearts? Gallifrey? Time-lord? Not here. Cushing was only in his early fifties, but plays the part about twenty years older. And “Who”? Here, it’s his family name. I’ll repeat that: it’s his family name. Pause to roll eyes. Though unfortunately, his grand-daughters are named Barbara (Linden) and Susan (Tovey), rather than Cindy-Lou.

There is still the Tardis, here invented by the Doctor, and it whizzes the three of them, along with Barbara’s boyfriend, Ian (Castle), off to a distant planet, after Ian sits on the lever which operates it. That’s basically his role: to be a clumsy, inept and generally useless sidekick, and this may be the way in which the film differs furthest from the current series. The planet has largely been destroyed by a nuclear war, with the two races then diverging. One has retreated inside a city, donning metal suits to avoid the radiation and rolling around as the Daleks. The others, the Thals (above right), appear to have reverted to a culture based on a Las Vegas floor-show. They have a medicine allowing them to withstand the radiation; the Daleks want that, and when they discover it doesn’t work on them, prepare to explode another nuclear bomb that will jack the radiation up to lethal levels.

The Daleks are, frankly, a bit crap, and I speak as someone terrified of them as a child.  A major plot point is that they get their power through the floor, like dodgem cars, so have all the mobility of Scalextric models and can be stopped by pushing them onto anything insulated. When the humans works this out, it leads to Ian climbing into one, though the Doctor and Barbara then have to drag him around by the exterminating nozzle. It still proves capable of fooling the other Daleks. One wonders how they ever conquered the universe, since slopes and open lift shafts also prove… troublesome.

They… speak… very… very… slowly… and don’t even redeem themselves by yelling “Exterminate!” Their taste in interior design is interesting, with the decor including flanges made out of gold tin-foil and, of all things, lava lamps. Yes, lava lamps. As the screenshot below shows, we’re not kidding. We wondered if, perhaps, they also had one of those swing chairs and a few Roger Dean posters elsewhere in the complex.

Of course, this Doctor and his companions are a match as far as sharpness goes. After they escape, they head back to the Tardis to leave, everyone completely forgetting – teehee! – that a key component was still in the possession of the Daleks, having been taken when they “searched” the Doctor following his capture. Quotes used advisedly there, since it doesn’t even qualify as a cursory pat-down from a bored night-club bouncer at the end of his shift. In their defense, you can’t do much, when you have a sink plunger and a pincer instead of opposable thumbs.

They team up with the Thals, who need to be convinced they must fight the Daleks. Again, this runs absolutely counter to the modern Doctor, to whom violence is abhorrent, to be avoided at all costs. Here, not so much: Cushing basically calls them a bunch of fags and makes clucking sounds until they agree to attack. Just in time, too, as the Daleks have started their 100-second countdown to exploding their nuclear weapon.

Two things stand out here. Firstly, it’s very accommodating of the Daleks to use Earth units – heck, they label their control panel in English, too. Secondly, what follows is the longest 100 seconds in cinematic history, the timer apparently only working when the camera is on it. The countdown runs for a full five and a half minutes before Ian causes the Daleks to turn all their weapons onto their own control panel, destroying both it and themselves. Oops. Like I said: how the hell did this lot ever become the terror of the universe?

Undaunted, much the same team created a sequel the following year, Daleks’ Invasion Earth: 2150 AD, whose main distinguishing feature is that it doesn’t entirely suck. The storyline is better thought out, some of the flying saucer special effects are surprisingly good (except for the crash at the end, which is clearly about eight inches high), and the supporting cast is helped by stalwarts such as Andrew Keir and Philip Madoc. There’s a nice resonance with the current series, in that one companion is Bernard Cribbins, who plays the grandfather of new companion Donna Noble for the reboot. Mind you, I could really have done without seeing him and Cushing in black PVC catsuits (left). That sort of thing needs to be strictly reserved for Honor Blackman.

Even by the low standards of mid-sixties science fiction, they are marginally tolerable at best, and the intervening near half-century has not been kind. Often reaching the jaw-droppingly bad level, it’s no wonder both films are treated with contempt bordering on loathing by Whovians, with the series canon denying their existence, due to the changes made to the beloved series.