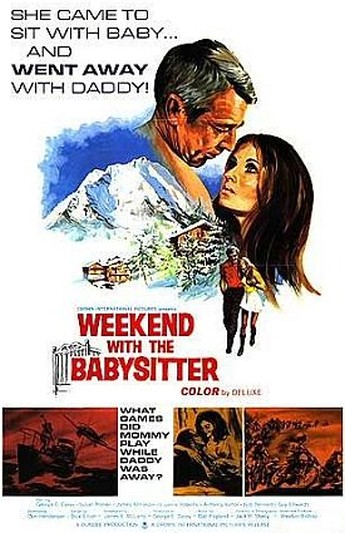 A couple of years after The Babysitter, Henderson revisited a similar topic, with Carey once again playing the middle-aged man, trapped in a loveless marriage, who is shown the way to freedom by his child-minder. Here, he’s film director Jim Carlton, whose wife Mona (Roberts) is a former actress with a nasty drug-habit. She heads off for the weekend with her mother, leaving Jim with Candy (Romen, not a patch on Patricia Wymer). She introduces him to her hippie friends and the joys of marijuana – yes, this is a film director who’d apparently never inhaled, which stretched my credulity a tad – and opens his mind to things like motocross. No, never had that down as a hippie-sport either. Meanwhile, his wife has actually slid out out of Mom’s to get a fix from sleazy heroin dealer Rich Harris (Almanzar), who then kidnaps Mona, making her go cold turkey until she hands over their boat to help with smuggling some more dope up from Mexico.

It’s an interesting line drawn by the script. Marijuana is perfectly fabulous, heroin sucks – and the same goes for their respective users (the concept of “gateway drugs” is, inexplicably, ignored here…). It’s a refreshing change from the normal “Drugs are bad, m’kay” line, though not much less sterotypical. As in the original, Candy’s friends have no problems accepting Jim, despite his obvious squareness; however, things don’t gel, with the two halves of the plot remain entirely separate until the final sequence, which pulls them together in a completely implausible manner. The Jim/Candy relationship fails to come over as anything more than the dubious wish-fulfilment of a middle-aged man, whisking his young paramour off by private plane to a cabin in the mountains. Its failure to convince renders the inevitable sex scene somewhat creepy, and the Requiem for a Dream-esque moral collapse of Mona into lesbian canoodlings doesn’t make up for this. A sharp contrast to its predecessor, I found it tough to stay awake.