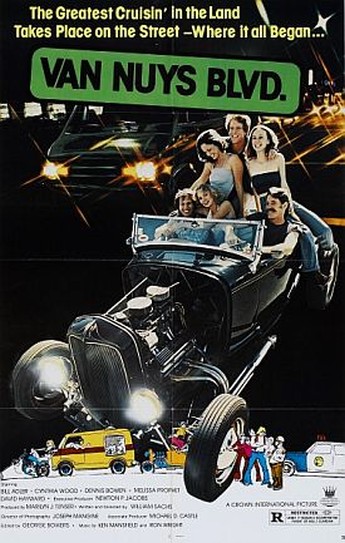 Describing this 1979 film as “loosely-plotted” would give the script more credit than it deserves. Country boy Billy (Adler), bored with small-town life, heads for the titular street in Los Angeles. Immediately on arrival, this proves to be a wise decision, as basically the first person he meets – Wanda (Strohmeier), a waitress at a fast-food diner – bangs him in the back of his van. Yes, this was clearly a different, pre-AIDS era, boys and girls. The rest of the films is based around him and the various people he meets, such as rival hot-rod driver Moon (1974 Playmate of the Year Wood) or hip veteran of the Boulevard Chooch (Hayward), with subplots drifting off in semi-random, yet interconnecting ways. For instance, Wanda ends up becoming Chooch’s girl – a bit embarrassing when he introduces her to Billy – there’s a fair amount of screen-time given to the predicament of Officer Zass, the policeman who hassles the kids that cruise the strip, only to get his come-uppance, courtesy of Wanda (who gets around a bit, if you know what I mean, and I think you do). There’s a lot of funky music, shots of life on Van Nuys and disco dancing.

While this has the potential to be extremely tedious, it actually proves surprisingly watchable, assuming you’re in the right mood – not looking for anything plot-driven. It has a certian credibility in terms of the period atmosphere, and the characters on display aren’t a chore to hang out with – for ninety minutes, at least, I’m not so sure about any longer than that. A breezy romp through late seventies street culture, it is happy to hang out with the Billy and his friends as, for example, they spend an afternoon at a theme park. Nothing of actual importance happens there. Indeed, the same applies for much of the movie: I thought Officer Zass would become the antagonist, but he’s handcuffed to his cruiser, near-naked, on the beach for much of the film. In terms of dramatic conflict, there’s basically zero, between a face-off at a gas station near the beginning, resulting in some amusing destruction, and the end, where Billy has to choose between his wheels and his girl. While no classic, certainly better than expected.