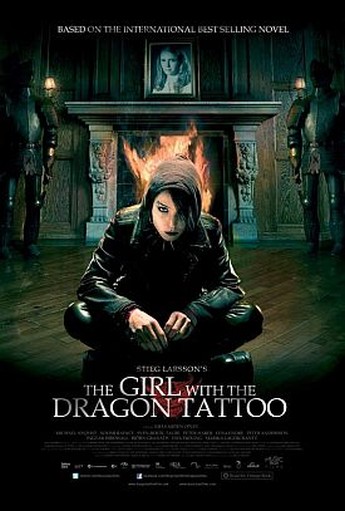 This thriller has taken over $100 million worldwide, an impressive feat for a Swedish movie, and it’s easy to why, being an intelligent, well-scripted piece, with a couple of very solid performances at its core. Journalist Mikael Blomkvist (Nyqvist) has just lost a libel case and looks to be heading to prison; while his company decides whether to appeal the case, he takes a leave of absence, and is hired by industrialist Henrik Vanger (Taube) to look into the disappearance, forty years previously, of his niece Harriet. No-one has been able to crack the case, and Henrik fears he might die without finding out the truth. He is helped, initially anonymously by Lisbeth Salander (Rapace), a hacker originally hired by Vanger to investigate Blomkvist, but who finds herself intrigued by the case – some of her own issues have similarities to Harriet. [The Swedish title was Men Who Hate Women, and misogyny is one of the main themes of the movie] They uncover a pattern of ritual murder, going back eve before Harriet’s disappearance, but the truth coming out could be very uncomfortable, and it’s soon clear to Mikael and Lisbeth that some people will go to any lengths to stop them.

Initially, it seems as if there are two movies here: Mikael and Lisbeth don’t physically meet for quite some time, and while the former is beginning the investigation, the latter is having hellish problems with her guardian (Andersson), who abuses the power he has over her quite horrifically, until Lisbeth fights back in a way that’s certainly memorable. Not your typical movie heroine, shall we say – not least because she smokes – and that’s what lifts this up above the normal police procedural, where character is secondary to plot. When she links up with Mikael, they form an unstoppable combination, and conversely, that might be the film’s main flaw: evidence and data seems to appear out of thin air, particularly at the end when Harriet’s fate is discovered. It’s just too easy to be plausible, and that weakens the end result. At 151 minutes, while it’s longer than your average detective story, the time really doesn’t drag-on at all, hohoho. There’s two more movies based on the trilogy of books by the late Stieg Larsson, and on the basis of this, I think they’ll be getting watched, sooner rather than later.