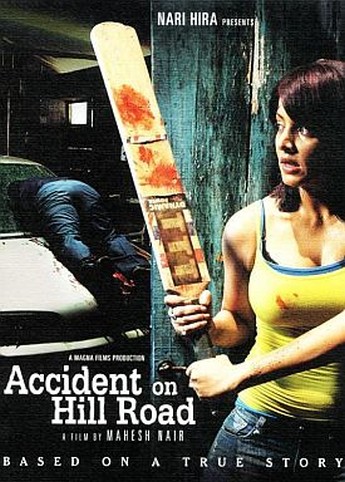 On her way home from a night of clubbing and severely under the influence, Sonam (Jaitley) barrels into Prakash (Sheikh), a man who had lost his wife to illness earlier that day. The impact leaves Prakash embedded in the windscreen of Brandi’s car. Fearing the consequences of being caught DUI – she was celebrating a potential new job – she flees the scene and parks in her garage, while she decides what to do. In the cold light of morning, things aren’t any better, not least because the victim is still alive and is begging for help. She enlists the help of her self-proclaimed gangsta boyfriend (Singh) to take care of the problem and dispose of Bardo, but things go from bad to worse. If that synopsis sounds familiar, that’s because this is a Bollywood remake of Stuck, the Stuart Gordon film. Given it’s so close as to be often shot-for-shot, I figured I might as well save time, and copy and paste the storyline. The only significant change is that Prakash is no longer homeless – I imagine because India has no homeless people.

Sarcasm aside, it falls a little short of the original, though how much is due to sheer familiarity, it’s hard to say. Jaitley, as the anti-heroine, is certainly close to the equal of Mena Suvari, but there are some elements which feel shoehorned in to the setting, and Singh is never convincing in the slightest as a gangster [he reminded me of Tony Slattery more than anything]. What works in its favor is the extreme departure from ‘typical’ Bollywood, with a bleak tone and no dance numbers. Really, if you’d to pick any film to get a do-over there, this would be well down the list, but it is apparently an official, fully sanctioned remake. Bollywood heroines are usually good only for gazing, gooey-eyed, at the hero. They certainly do not take ecstasy, drink vodka, knock people out with cricket bats or douse them in petrol. Brandi does, and it’s refreshing to see, though I can see why the film tanked in India. Probably superfluous to eyes that have seen the original – yet if you enjoyed it, this is an interesting, poppadum-flavoured variant.