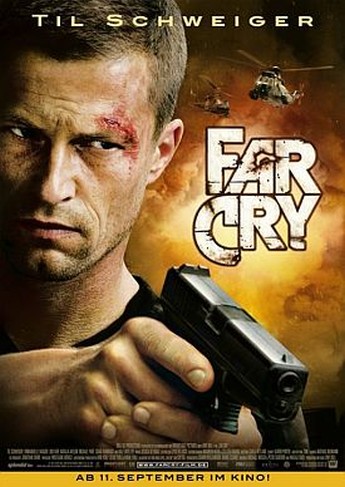 I like Uwe Boll, because he’s pretty much one of a kind. What other director has challenged his critics to a boxing match – having “forgotten” to tell them he was an amateur champion, hehehe. Or openly suggested “throwing the cokeheads out and cutting the bullshit of breakfast, lunch, and dinner meetings” in Hollywood. And if you think he’s a horrible director because of House of the Dead, I have five words for you: House of the Dead 2. That all said, this is pretty uninspiring stuff; he sued a bunch of the people who downloaded it, but I don’t know why they just didn’t wait for it to show up on the SyFy channel. Journalist Valerie Cardinal (Vaugier) goes off to investigate an island in the Pacific NW, where her uncle Max (Möller) has been working security, sending her tidbits suggesting something dubious, before he vanished. He teams up with boat captain Jack Carver (Schweiger) who (wouldn’t you know it?) is an ex-special forces colleague of Uncle Max. They discover Dr Krieger has been experimenting with creating super-soldiers, impervious to bullets or pain, and Max is now one of them.

Udo Kier playing a mad scientist. We know he’s insane, because he listens to Wagner. And, of course, because he’s Udo Kier, who has been doing this kind of thing since Flesh for Frankenstein. That’s about the depth of characterization we get here, and just about everyone else – particularly Cardinal and the fat guy to whom Carver ends up handcuffed – are immensely irritating. For amusement, we paused the movie as the heroine drove towards her target, and tried to predict where things would go from there: I think we nailed about 90% of the plot, with the minor exception of Krieger’s ultimate fate [we expected Max to take him out]. As well as Kier, who is his usual, reliable self, the other credit goes to action/second-unit director Scott Ateah, as the numerous fight sequences were put together with some energy, and this helped stave off the sense of tedium that generally enveloped us any time the characters opened their mouths. Still, probably fair to say Boll should be steered away from video games – they’re basically a no-win scenario for everyone involved.