Another swing and a miss by Hammer, this again illustrates the limited range of possibilities inherent in the mummy movie. Even though this was only the third such film Hammer made, the well of invention already seemed perilously dry. Combine this with what must have been relatively high production costs (all that spray-on tan…) and it becomes easy to understand why it was the last traditional such movie they would make. It was also the final film for Hammer to be shot fully at their long-time home of Bray Studios, production thereafter shifting to  Elsmere. [Despite various plans to turn Bray into flats over the years, the facility remains a working complex. It was recently used, appropriately, for the BBC adaptation of Dracula.]

This opens with a particularly dry prologue, which feels more like something you’d be forced to watch during a school history lesson. It’s all the worse because details of the bickering between various members of the Egyptian royal family are, in fact, entirely irrelevant. They play no part in the story, which is the bog-standard one about a curse – in the shape of a large, bandage-wrapped creature – being visited on all those who violate the ancient tomb. In this case, the poor suckers who ignore the dire warnings of doom are an expedition led by Sir Basil Walden (Morell), and financed by professional asshole, Stanley Preston (John Phillips). Also about are Stanley’s son Paul (Buck) and language expert Claire de Sangre (Kimberly). We almost get a “cunning linguist” joke, but I guess it was, literally, too soon…

Preston Sr. is a nasty piece of work, and on their return to Cairo, has Sir Basil committed to an aslyum, so Preston can claim credit for the tombs discovery. The mummy, played by Eddie Powell, who was regularly Christopher Lee’s stunt double, is reactivated by faithful servant and dire warnings of doom prophet, Hasmid (future Dr. Who Master, Roger Delgado). Cue the expected sequences of murderous rampage, though these are perhaps slightly more savage than usual. My favourite among them was Michael Ripper, in his role as a lackey to Preston, who gets hurled bodily through an upper-story window to the streets below. At least it’s more than strangulation after strangulation. 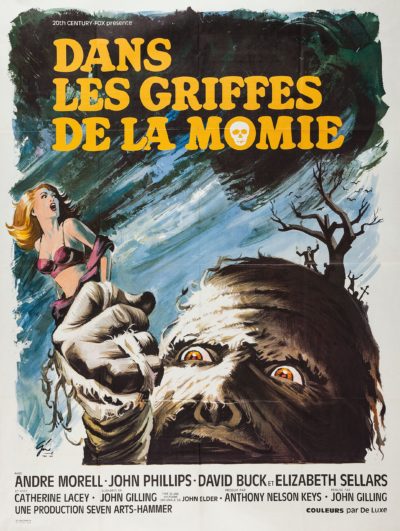 Eventually, you get to see what you want i.e. Preston Sr. meeting his well-deserved end as he tries to sneak away in the dead of night. It’s then up to Preston Jr. and Maggie to stop the monster, by the latter reciting the spell of destruction. They are greatly assisted by Hasmid going full Evil Overlord, and helpfully yelling at them, that the ritual will only work if they are holding… the mummy’s shroud. Yes, two minutes before the film ends, the title becomes relevant. I must say though, its destruction is kinda cool, pawing at its face as it slowly disintegrates into dust. It’s not unlike the death of the Count at the end of Dracula, though things have improved technically in the decade since.

Unfortunately, poor pacing sinks this. We, the audience, do not care about ancient Egyptian soap-opera. We don’t care about archaeological excavations. We only care about murderous rampage, and here, the mummy doesn’t even open its eyes until the 45-minute mark. That’s forty-five minutes of your life, you’ll never get back. And even when things kick off, there’s no particular sense of escalation or acceleration. The finale seems to happen, more or less by chance, when all the relevant players end up in the same place at the same time. It doesn’t help that lead-billed Morell is first on the mummy’s chopping list, and so checks out surprisingly early, barely half an hour after his opening scene.

This matters because it leaves us in the hands of Buck and Phillips, and it’s probably telling that, for both men, this was their only appearance for Hammer. Phillips probably does a better job, with Preston Sr. being a genuinely unpleasant character, to whom you take an immediate dislike from his first appearance. But this does mean every scene in which he appears, is like nails on a chalkboard, and sadly, rather than getting his just deserts, his ultimate fate is mundane in comparison to some e.g. acid to the face, then burned. I did enjoy his wife’s passive-aggressive sniping at him, however, with lines like, “That’s very kind of you, Stanley, but I don’t really think you need concern yourself on my account.”

Indeed, it’s largely the women that provide the film’s most dramatic moments, certainly more so than the bland and forgettable Buck. Kimberly (billed here as “Kimberley”) has large, luminous eyes that are almost hypnotic, even if her character should be named Ms. Buzzkill for gloom-laden statements like, “When the desert is behind us begins the real danger, and some of us won’t survive.” I mean, she’s not wrong, but still… Better yet is veteran Catherine Lacey, who thirty years earlier had been the high-heels wearing nun in Hitchcock’s The Lady Vanishes. She plays a fortune-telling old crone, who cackles maniacally while spitting fire, gleefully informing Claire she’s going to die “in a few minutes from now.” Take that, Ms. Buzzkill. 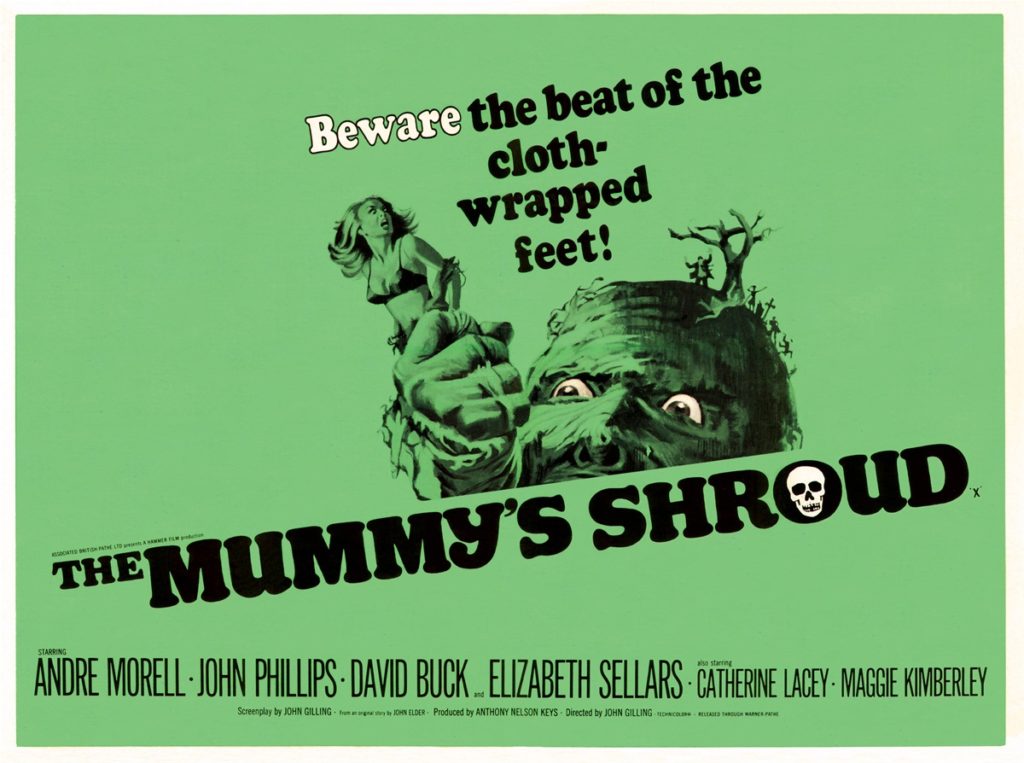 But in between her and the murdering monster- and, let’s be clear, the latter represents only five percent or so of the film’s running time – this is thoroughly uninteresting. It’s certainly the case that, if you’ve seen one of Hammer’s first three mummy films, you’ve basically seen them all. The first at least had Peter Cushing and Christopher Lee; the closest this comes to either is an opening narration by someone who sounds vaguely like Cushing (it’s actually Tim Turner). It can offer one of the more derisory tag-lines in horror history: “Beware the beat of the cloth-wrapped feet!” Personally, this conjures up images of some kind of hip Pharaoh-esque musical, featuring toe-tapping numbers from some popular pop combo. To be honest, that would likely have been considerably more entertaining.

[November 2010] Got to say, I love that poster, which makes it seem like this is a bandaged version of King Kong or something. Of course, the reality is nothing like that. Instead, it’s the usual: to wit, find the tomb, open the tomb, be cursed by the tomb, get “paralyzed with fear” (rather than mustering the gentle amble necessary to out-run the mummy), die. Rinse and repeat, until someone finds the necessary scroll, amulet or widget necessary to stop the mummy – or better yet, turn it against its controller. This lack of variety might be why you can get a rush of, say, zombie or vampire flicks, yet mummy movies only seem to appear about once every five years. This one, in particular, apes Curse of the Mummy’s Tomb, with a blustering, egomaniacal leader Stanley Preston (Phillips), overseeing the expedition of Sir Basil Walden (Morrell) and his minions. Despite the usual dire warning from a local they go ahead with the dig, uncovering a young prince’s corpse, and take it back to Cairo, re-uniting it with the mummy of his bodyguard. The mummy is so delighted at the reunion, he wants to give each of the expedition members hugs of gratitude. By the neck.

The main change here is that this takes place entirely in “Egypt”. Quotes are used advisedly, since it’s apparent that Hammer’s budget was not up to the cost of doing any significant shooting there – even the “desert” sequence was shot in a Gerrard’s Cross quarry. They’d probably have been better off not bothering, rather than having actors black up unconvincingly to play Egyptians. Otherwise, things unfold in exactly the way I’ve come to expect, with little in the way of surprises, except for Kimberly’s curious similarity to Angelina Jolie. The only other point of note is Hammer stalwart Michael Ripper – for once, not playing “innkeeper” or “constable”, but getting to sink his teeth into a proper role as Preston’s flunky, and it’s a pleasure to see. The mummy, unfortunately, looks like someone simply put a papier-mache mask onto the actor, and almost completely fails to exude any kind of menace. Maybe I’ve just become jaded; however, if it’s another decade or so before I see another mummy movie, that’ll be fine by me.