After the success of their Frankenstein adaptation the previous year, doing the same for Dracula seemed a natural step for Hammer. And if its predecessor was a hit, this time they knocked it out of the park, with a version that, arguably, is still the best ever of the story. In an interesting twist, this take has Jonathan Harker an active vampire hunter, who tries and fails to slay Count Dracula (Lee), though does take down the Count’s bride. His partner, Abraham Van Helsing (Cushing) arrives too late, just missing Dracula and having instead to stake Harker. The Count has moved on, and his quest to take revenge for his bride on Harker’s fiancée, Lucy (Marsh), kicks off an escalating battle with Van Helsing and Lucy’s brother, Arthur Holmwood (Gough). 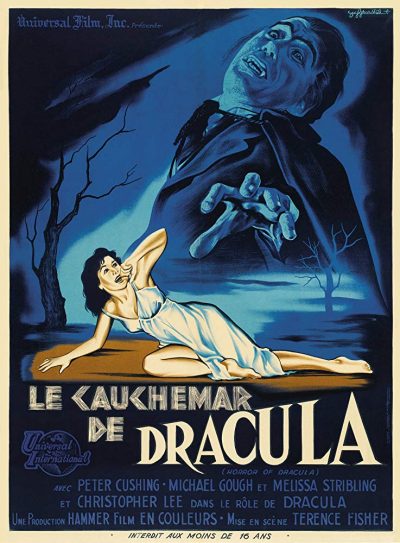 Cushing is just awesome. The key thing about any portrayal of Van Helsing, is being able to sell the concept of vampires being real. You need to believe he believes, and that’s not an issue here, Cushing being thoroughly convincing and speaking with impeccable command and authority. As a result you’re prepared to fall in behind Van Helsing, when he delivers lines such as, “If I am to help your sister-in-law, there are certain things you must do to help me, however unorthodox they may appear.” The other half of the equation is Lee, even though the two only share the screen right at the end. It’s a bit of a shame we don’t see more of the urbane aristocrat depicted at the start. For once the fangs come out, he’s a feral predator, and I’m not sure the Count says another word the rest of the film – unless intense hissing qualifies?

If there’s a weak link in the performances, it’s probably Gough, who to this viewer, comes over as a low-rent version of Benedict Cumberbatch. The women mostly look decorative in Gothic nightgowns, though Marsh exudes a certain creepiness after her death. There’s also the entirely unnecessary comic relief offered by a customs official, who appears to have been auditioning for Carry On Sergeant (the first entry in that franchise, released later the same summer). The technical side certainly isn’t an issue. One benefit of making a period piece, is that it’s less likely to date, and everything crackles on the screen as if this was a contemporary production. Of particular note: Jimmy Sangster’s script covers all the necessary elements,  Jack Asher’s lush cinematography, and James Bernard’s score, which all but requires you to sing along: “DRA-cu-laaaaaa…”

Certainly, it all seems very restrained by modern standards, and the final sequence, in which Dracula “melts” when exposed to sunlight, is about the level of a bargain Halloween haunt effect. Yet, again, Cushing and Lee sell it so effectively, that the quality doesn’t really matter. The horror on Van Helsing’s face and the agony being experienced by the Count transcend the wobbly execution, and give it a punch far beyond what it deserves. Special effects may age; great performances, not so much.

The above article was part of 31 Days of Horror. But, wait! There’s more… 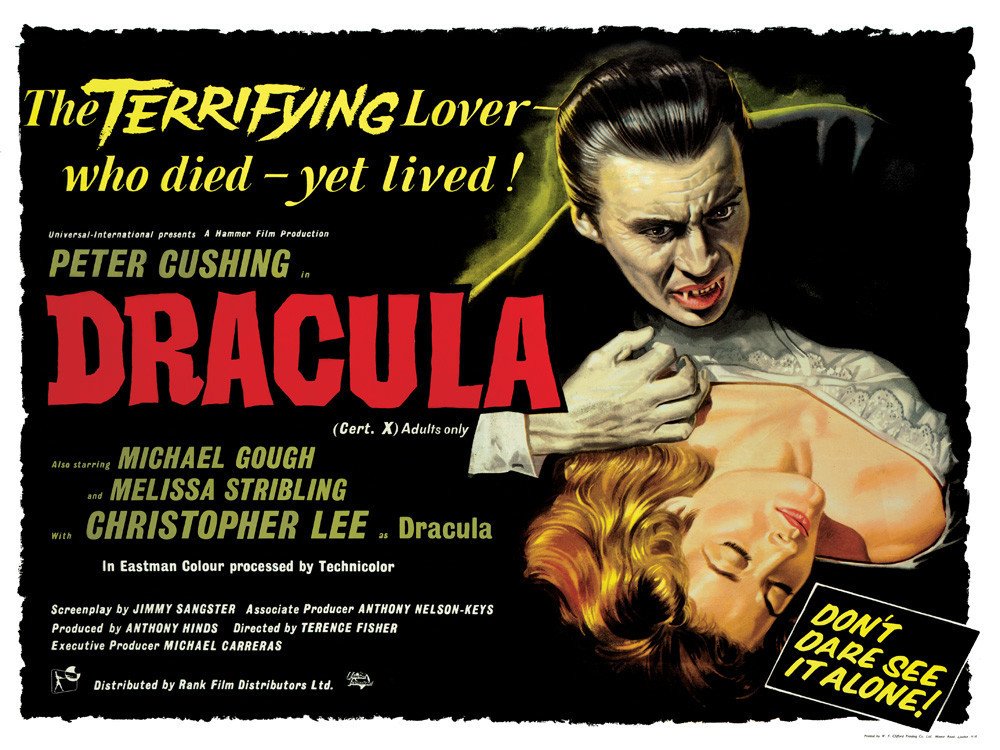 Considering Dracula holds the official world record for literary character most often portrayed on film, it’s impressive that this is probably still the best version of the story, after more than a century of efforts. Oh, some may tout Bela Lugosi; others may prefer Coppola’s adaptation with Gary Oldman. But I think, for a balanced combination of Dracula and his nemesis, Van Helsing, this remains the standard to which all others aspire, and so far have fallen short.

Lee brings a combination of menace and charismatic poise to the role. Initially, he seems quite the urbane aristocrat, in this version, employing Jonathan Harker to index his library. But there’s a steadily-increasing sense of disquiet and menace, until the gloves come off, and the ferocious nature of his evil is made obvious. By making Harker a vampire hunter himself, an associate of Van Helsing who is fully aware of what he’s walking into, the film elegantly side-steps the thorny issue of why someone wouldn’t nope the fuck out of there as the warning signs mount up. 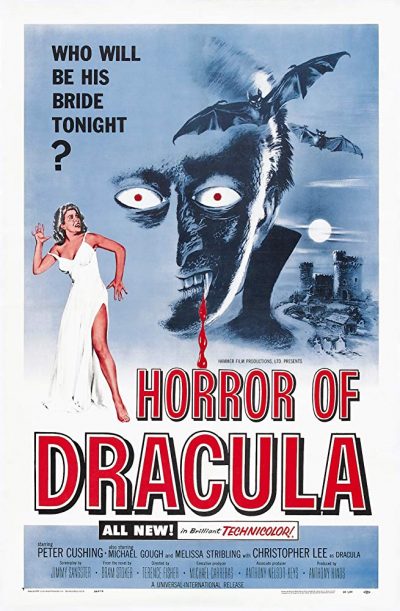 It’s 25 minutes before Van Helsing appears, introduced as he enters the local inn near Dracula’s castle. It’s shot almost like the swaggering gunslinger entering the saloon in enemy territory, with his face initially obscured. But, courtesy of Cushing’s performance, there’s no doubt who’s in control the entire time, with his Van Helsing the kind of man who seems very easy to trust.

Though he’s not infallible. I mean, after delivering strict instructions on the care of Lucy, having suspected she’s being attacked by Dracula, Van the Man doesn’t hang around, but vanishes off with a vague, “I’ll be here in the morning.” So where exactly was he, when Lucy was becoming a fatal, light snack for Drac that night? “There was nothing I could do to save her,” he says the next morning. Um, be there, maybe? I’m just saying…

Anyway, it’s interesting that the film removes entirely the boat section of the novel, and indeed, England as a whole. The entire thing takes place in that vague, middle-Europe which would become Hammer’s Disneyland, either in Dracula’s town of Klausenburg, or Van Helsing’s of Karlstadt. It strips down the players from the book too: there’s no American Quincey Morris, no Dr. Seward and not even a Renfield. In exchange, are added two comic-relief characters, a mortician and a customs inspector.

But they both work, and the overall trimming results in a fast-paced plot that accelerates almost constantly, from the languid early stages of Harker in the castle. By the time Van Helsing returns there, in hot pursuit of his target, it’s at a gallop. Cushing has become a full-blooded action hero, charging up stairs and across tables to defeat Dracula with a combination of knowledge and faith. Good triumphs over evil, as it must – at least, until the demands of the marketplace require a rematch…

This was rewatched and the section above added for Hammer Time, our series covering Hammer Films from 1955-1979.

And even more! [August 2010] More than fifty years on, this still remains one of the classic vampire films of all time, and possibly the best version of Bram Stoker’s original novel ever filmed, despite some interesting deviations from the plot. Most obviously, Jonathan Harker is not an innocent solicitor, but goes to Dracula’s castle fully intent on destroying him. He succeeds in killing the Count’s bride, which makes Dracula’s interest in Harker’s fiancee, Lucy, a matter of personal revenge as much as anything. However, Harker is a total wuss, a fatal flaw in a vampire hunter – his hesitation when staking is what dooms him.

That makes an interesting contrast to his colleague, Dr. Van Helsing (Cushing), who is decisive and sharp-witted. For instance, when trying to protect Lucy, he wisely doesn’t get into the whole vampire thing, and simply dictates the preventative measures: . garlic flowers, windows closed, etc. Arthur Holmwood (Gough) discovers the truth of what’s going on for himself, which certainly beats having to explain it – though Cushing, as ever, sells the outlandish concepts involved with marvellous conviction. The other side of the equation is Lee as Dracula: initially a suave aristocrat, but it’s not long before that side of his character vanishes – after his bride tries to nibble on Harker, he doesn’t say a single coherent word to anyone the rest of the film, it’s all hisses and snarls. However, the groundwork has been laid, and there’s also an enormous amount of sexual tension on view, particularly for the era – this is most notable when he is draining Lucy, but is present in almost every scene in which Lee appears.

Van Helsing has an interesting speech comparing vampirism to a drug-habit, a concept explored more fully in Abel Ferrara’s The Addiction, and he also disparages the notion that the Count can shape-shift. Indeed, Dracula here doesn’t have many special powers at all, beyond near-hypnotic charisma. The film is quite beautiful to look at, and during the slower moments [not that there are many], you find yourself admiring the set design and cinematography. But it’s Lee and Cushing who power this, and even if they share only a couple of scenes, neither man has been bettered in their respective roles since. B+