This is likely one of those films where the less you know about it going in, the better. We were more or less oblivious, beyond the bare bones. To wit: Norval (Wood) goes to visit his long-estranged father, Gordon (McHattie) in a house on a remote part of the Oregon coast. That’s pretty much it. If you’ve seen the film, you’ll realize why I got to the end, and could barely remember where we started, let along how we got from there to here. Such is the radical change over the course of proceedings, from the terse synopsis above. 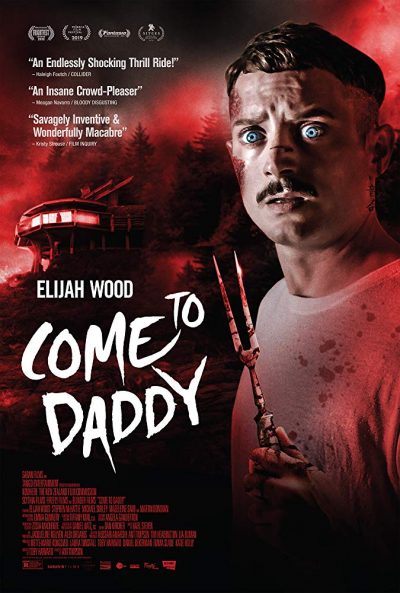 It is a bit of a double-edged sword, mostly because McHattie is a joy to behold in his role, and he makes a relatively early departure from proceedings. Up until that point, it’s been a heap of fun to watch him spitting acid at Norval, who is clearly a massive disappointment. For Norval is a musician who boasts of being pals with the likes of Chance the Rapper, and is recovering from “alcohol dependency issues”. Meanwhile, Gordon drinks heavily, and likes what he calls “fight stories”. The tale he tells goes like this: “I once accidentally kicked a guy’s ear off. I didn’t mean to, but the fucker flew off. I could see right into his skull.” The contrast between the two is a delight to see unfold, Norval gradually having to accept the reality that his long-lost relative is not a very nice person.

I’d have been quite happy to watch their relationship deteriorate over the course of ninety minutes of increasingly intense bickering. But the script clearly cares not one whit for I want, and has other ideas in its twisted little head, to put it mildly. About which it’s best if I don’t say anything, even if it leaves me with two hundred words remaining to write. I will say that Wood is certainly carving out an interesting career for himself, post Lord of the Rings. If this isn’t quite up to the same hellish level of grimness as his remake of Maniac, it’s hard to imagine something more calculated to drive all those images of Frodo looking concerned from your mind. Though I’m not sure resembling a refugee from Frankie Goes To Hollywood is a good look for Elijah.

The movie even has a revelation which seems intended to evoke comparisons to the turning point of Parasite., with a hidden door beyond which… there is stuff. Thereafter, however, it goes willfully in its own directions. Not all of which perhaps make narrative sense, such the way in which the meek recovering alcoholic gleefully embraces his inner violent thug. [You do not want to know how that fork he’s holding in the poster got that blood on it] Still, it’s amazing to see Timpson, whom I vaguely recall trading ‘zines with back in the days of Trash City, now directing a bloody mess of a film like this.