While generally well-regarded as a follow up to the smash hit which was Curse of Frankenstein, personally, I found it more than slightly underwhelming. Perhaps it’s the way that Baron Frankenstein (Cushing) seems to be a kinder, gentler mad scientist, no longer prepared to commit cold-blooded murder in the pursuit of his science. Or maybe it’s the lack of any conflict between the Baron and his associate, with Dr. Hans Kleve (Matthews) a willing patsy rather than acting as a moral compass. Or it could be the complete uselessness of Gayson as upper-class charitable nurse Margaret Conrad, who serves virtually no purpose at all to the story-line. 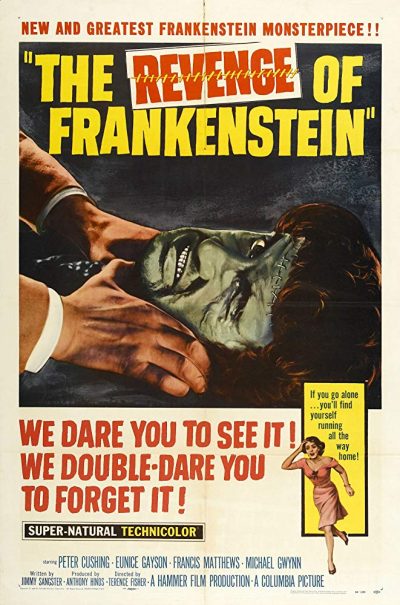 It starts strongly enough, despite writer Jimmy Sangster having to script himself out of the corner left at the end of Curse. Reportedly, Hammer head James Carreras had sold the film to America, based purely on a poster, and when Sangster pointed out the issue of the central character’s impending execution, was told “You’ll think of something”, and given just six weeks to come up with the script before shooting started. The trick used is to have the Baron in cahoots with the hunch-backed executioner, Karl (Oscar Quitak), swapping in the priest to become the guillotine’s victim. For the Baron and Karl have agreed that in exchange for being spared his appointment with Mr Slicey, Frankenstein will work towards transplanting Karl’s brain into a better, considerably less hunchy vessel.

If you’ve seen the first film, this would seem like a dodgy proposition, given the Baron’s ruthless willingness to sacrifice anyone for scientific progress. But, as noted, Frankenstein seems to have been mellowed as a result of his brush with death. Though he doesn’t seem too bother about anyone finding out about his escape from capital punishment. He doesn’t relocate from Switzerland to another country, moving only over to another town, Carlsbruck, nor does he change his appearance in the slightest. Even the pseudonym adopted, Dr. Victor Stein, is hardly going to fool anyone. About the only change is, rather than a solitary researcher, he is now an actual medical practitioner. He works both with the wealthy and does charity work for the poor – though the latter, admittedly, does provide a handy source of spare parts for the Baron’s off-hours activities in a former wine-cellar turned laboratory. 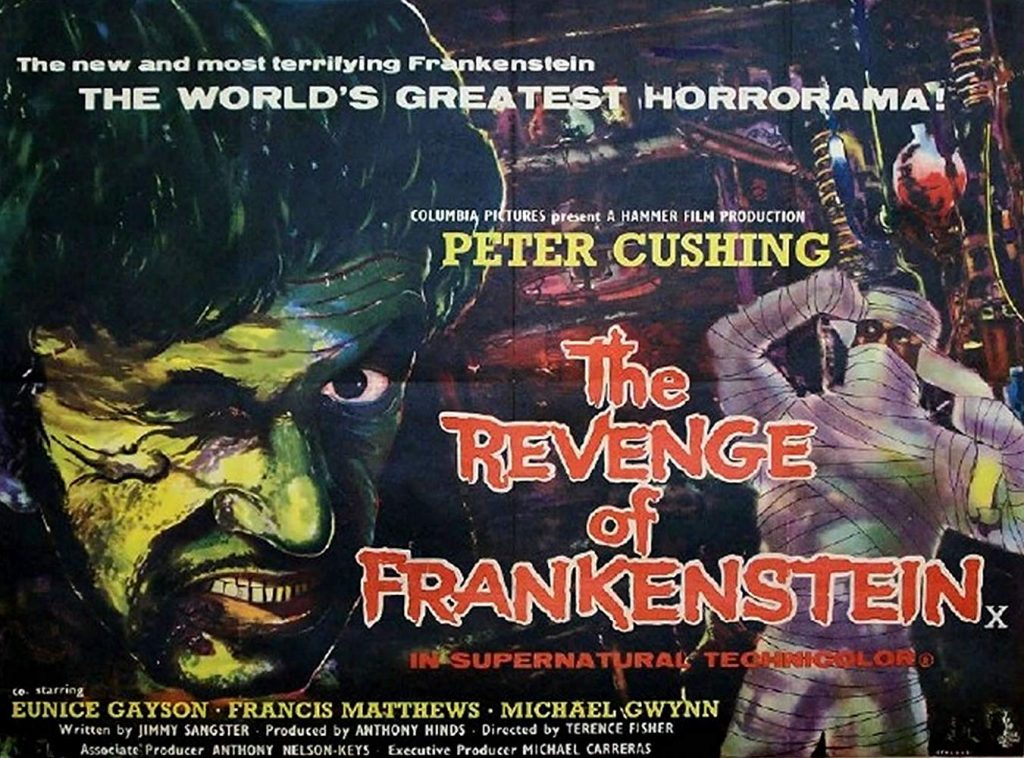 However, rather than keeping his head down and maintaining a low profile, he snubs the local medical council, by refusing to join them. That brings him to the attention of Dr. Kleve, who recognizes “Dr. Stein” as the Baron. Fortunately, rather than blackmail or extortion, the young physician wants to become a disciple and learn from Frankenstein’s wealth of knowledge. Though the Baron is still having a problem with creating a brain. He has only got to the part shown in the picture at the top, where disembodied eyes and arm, floating in a tank, can respond to fire. Though this angle is rapidly forgotten, because they’re ready to transplant Karl’s brain into a newly-assembled corpse (Gwynn). This was cobbled together out of bits removed from the poor, who are lending an unwitting hand to Victor’s work. Or sometimes an entire arm.

Initially, the process goes fairly well, though poor Karl v2.0 is quite discombobulated by the experience. Wisely, the Baron straps him to the bed to recover. Less wisely, Margaret comes in and lets him go. For Karl then heads off, seeking to dispose of his old body, and is mistaken for a burglar, receiving a sound beating about the head as a result. And, we all know what happens in Frankenstein movies when there’s any kind of brain trauma. [Seriously, you’d think someone would have figured it out by now, and slapped a crash-helmet on their monster’s head, as soon as they have finished yelling, “IT’S ALIVE!!!”] As they say, you can take the brain out of the hunchback, but you can’t take the hunchback out of the brain. And so Karl reverts to his previous limping status. Oh, yeah: with extra added violent tendencies. And cannibalism. Because that’s a standard side-effect of concussion.

He then (literally) crashes a musical soiree where Victor is grilling Margaret. Interestingly, in the trailer above, the doctor calls out Karl’s name, causing the creature to turn towards and recognize him. But in the movie as released, that doesn’t happen, with Karl just yelling out “Frankenstein!” It’s clear he’s after the doctor’s help, though quite how he knows Victor will be there isn’t clear. Regardless, this obviously blows Frankenstein’s (not exactly deep) cover, and after his supposed grave is found not to contain Frankenstein, he becomes persona non grata in the local community. The traditional mob of angry villagers then assembles, in the form of his charity patients. Beaten within an inch of his life, Frankenstein’s brain is transplanted by Dr. Kleve into a convenient, entirely unmentioned alternative body, which exactly resembles Peter Cushing. And there’s no descent into cannibalism either, though “Dr. Franck” has at least learned not to stick around, and the end seecs him relocating from Switzerland to London.

It all certainly feels like the script was cobbled together in a few weeks, and in almost every aspect, I found it inferior to its predecessor. The make-up and effects are perhaps an exception, though Gwynn largely falls short of generating the same level of sympathy as Christopher Lee. The only moment I felt much for him was when he was gazing on his own likeness in a mirror, accompanied effectively by Leonard Salzedo’s score. This was Salzedo’s last work for Hammer; he had done a number of films previously, including Women Without Men, but would be replaced by the name most linked to Hammer, James Bernard, going forward. Although Cushing is good value as ever, I’m not a fan of the sympathetic version of Baron Frankenstein that we get here. I tend to feel the character is better served by a more villainous portrayal, and despite the exhortation of the poster, this may be the most forgettable entry in the Frankie franchise.