Today is Presidents’ Day, a peculiarly American holiday. I can’t imagine Britain ever adopting a Prime Ministers’ Day, for example. Though that might be my jaundiced view, based off the unending twat-line, of various political flavours, to have occupied the role since I became old enough to vote, back when Margaret Thatcher was steadily going off the rails. There hasn’t been one genuinely worth celebrating since Winston Churchill. Not that American politics of late has been much better, but earlier occupants of the White House seem considerably more revered than those of 10 Downing Street. It’s certainly hard to imagine any Prime Minster being the subject of such a lovingly inaccurate biopic as this or Abraham Lincoln: Vampire Hunter. The result here is a neat idea, but one which probably outwears its welcome over the course of an entire feature.

Up and coming politician Franklin 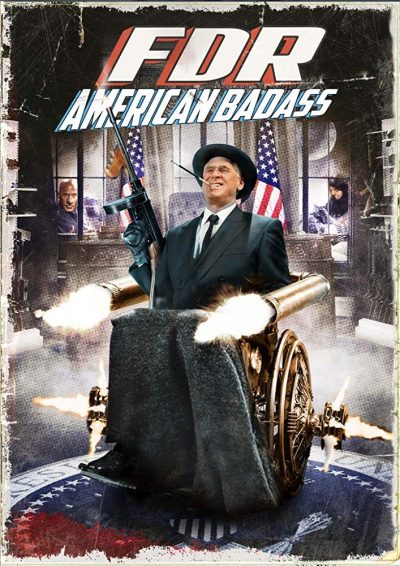 Roosevelt (Bostwick) gets bitten by a werewolf, which gives him polio. I wrote that sentence, and then spent five minutes staring at the screen, wondering how I could possibly follow it up. I still have no idea. Anyway, this gives him a life-long hatred of lycanthropes, which turns out to be for the best, since after he becomes President, it turns out the Axis leaders of Hitler, Mussolini and Hirohito are all werewolves. They plan to infect Allied countries through alcoholic beverages which have been tainted with were-blood. It’s up to FDR to defeat the threat. This apparently involves the wheelchair-bound Commander-in-Chief personally flying over to Normandy on D-Day, and parachuting down.

That’s just the top-level view, with a lot of other stuff going on. For example, the lengthy sequence where the President finds George Washington’s stash of blunts, gets high, and communes with the ghost of Abraham Lincoln. Who a) had a similar werewolf issue, and b) is played by Hercules, Kevin Sorbo. And I do have to say, for a low-budget spoof, Brawith has assembled quite the star cast, also including Ray Wise as Douglas Macarthur and Lin Shaye as Roosevelt’s long-suffering wife, Eleanor. Along with Bostwick, they all go for it in a way that’s admirable. Perhaps none more so than Robin Sydney, playing FDR’s secretary, tasked with spraying ketchup and mustard on her boss’s shrivelled little “hot-dog” legs, than licking it off. Who says acting isn’t glamourous?

It is certainly relentlessly non-PC, though the jokes about Roosevelt’s disability, e.g. he’s more concerned about whether his genitals work than his legs, are countered with the way he is, indeed, a badass. It’s done in a way I’ve not seen for such a character since Kung Fu Flid. [Though I’m sure the usual suspects will still complain about an able-bodied actor getting the role, rather than a genuinely disabled actor] But I can’t say it was able to sustain our interest throughout, and became steadily more wearing than daring. It may be guilty simply of trying too hard. Though I can’t complain overly much about any film which can deadpan recite lyrics from Bon Jovi’s Livin’ on a Prayer as dialogue.