Cripsploitation in the cinema has a long, distinguished history, going back to Tod Browning’s Freaks in 1932. The Far East is responsible for a number of the most memorable entries since then, such as The Crippled Masters from 1979. While films like One-Armed Swordsman had explored similar themes, its star, Jimmy Wang, actually had four fully-functioning limbs. Not so TCM, which features two genuinely disabled actors, in Frankie Shum and Jackie Conn. But there was also the fairly self-explanatory Mr. No Legs, with Ted Vollrath, an American film made the same year. That was then, however: we now live in more enlightened times, where nobody would consider such crass and shallow exploitation of the differently-abled, right? 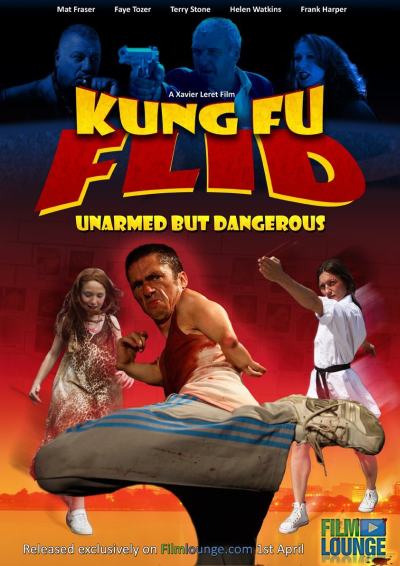 Enter Mat Fraser; like Shum, his mother took the drug Thalidomide during her pregnancy, resulting in Fraser being born with severely foreshortened arms. But to say that hasn’t stopped him, would be short of doing him justice. He’s a martial artist. He’s an actor. He’s a motherfucking drummer, who appeared in the 2012 Paralympics Opening Ceremony, playing Ian Dury’s seminal Spasticus Autisticus. He once proclaimed, “I’m Bruce Willis with flippers!” So, is Kung Fu Flid his Die Hard? Or more like Color of Night?

Truth be told, this is not a great film. It’s a plot-by-numbers, which sees the thugs of English mob boss Barry (Harper) burst into the wrong apartment. By the time they leave, Barry’s son has been shot in the balls by Jimmie Lovett (Harper), the actual resident; Jimmie’s wife, Lu (Watkins) also has a gunshot wound; and the thugs have run off with their daughter, Lola. To skip a bit in the story – not least because the explanation offered is shaky on a number of points – Jimmie goes after his daughter, while Barry goes after Jimmie.

It’s not subtle, but is passable enough in a British version of Taken kinda way. Harper is somewhat endearingly off-the-wall as a hard-nosed bastard with an unexpected soft spot for kids, but just about everyone else is playing characters right out of the Guy Ritchie playbook, without much in the way of subtlety or imagination. Fraser does have a decent level of intensity, and given his obvious limitation, is occasionally surprisingly convincing as an action hero (though I emphasize the word “occasionally”).

It’s clear Fraser wants to embrace and reclaim the “flid” term of abuse, which he had hurled at him as a kid. Yet the film seems to go out of its way to make no big deal of the lead’s status, with barely a mention of his obvious difference. While this is admirably inclusive in one direction, it does mean you’re left watching not much more than a mediocre low-budget gangster movie with an obvious gimmick – yet one the film doesn’t want to exploit. If you’re not going to embrace the elephant seal in the room wholeheartedly, I’m left to wonder, what was the point?