Or just Hell House, since the subtitle doesn’t appear in the credits. Indeed, despite the image above, I’m not prepared to swear there was a book, or anyone called “Samiel” in the film. Though let’s be honest, my attention may have wandered somewhat. As in: checked its phone, gone off to make a sandwich, played with the cat, checked its phone again… 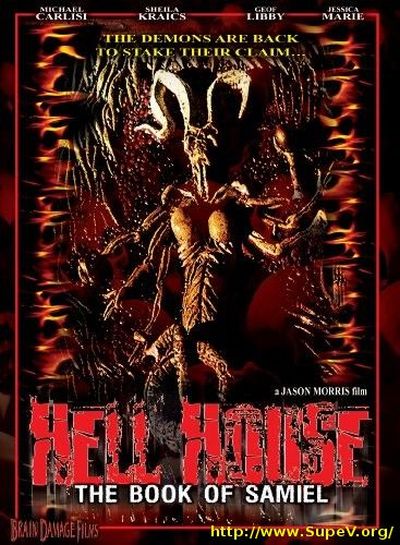 Not that the story here makes much sense. There’s a local story about a father who caught his daughter and the boyfriend making out in their car, so he set them and himself on fire. Somehow, this causes his house to become haunted, and ten years later, four teenagers dare to spent the night there. Except, rather than just ghosts, it suddenly turns out to be some kind of portal to hell, that needs three sacrifices in order for it to be permanently wedged open. It also causes the cameraman covering a local news report on the anniversary to go insane and kill the two reporters. Oh, and one of the teenagers has an abusive father, for no relevant reason. Yeah, after further consideration, I’d like to replace the word “much” in this paragraph’s first sentence, with “any”.

Part of the problem is that once we’re in the house, there are additional nightmare sequences that add to the horribly muddled nature of proceedings, since these have no basis in objective reality. These are also dull and uninteresting: having a couple of giant cockroaches crawling over an actor’s face is not exactly the epitome of terror, even it’s further than I’d personally go for the sake of art. It is somewhat amusing that one of the two lead actresses appears allergic to her top (Marie), while the other one (Kraics) appears to be permanently glued to hers. However, this does not, in any way, make up for the startling lack of death on view here: it’s as if the only way Morris could find leads was by promising their characters would not get killed off.

Some of the camerawork here is not bad, but this is more than counter-balanced by that perpetual bane of low-budget film-making: crappy audio. Even with what feels like a hefty does of post-dubbing, the dialogue is frequently muddied, not that you’re missing much. It’s a full hour into this before the portal thing receives any significant mention. If this had been established early on – even if the victims weren’t aware of it – and there had then been a gradual escalation toward its opening, the film might have stood a chance.