I’ve never given a credit to a canine before, but the one (or, possibly, ones) in this movie is damn impressive. He is the dog version of the Terminator: relentless, ruthless and apparently unstoppable, as he hunts down and chews up a dwindling band of migrants. They’re trying to make it across the border from Mexico into the United States, despite the truck breaking down in the middle of the desert. Their subsequent route brings them into conflict with Sam (Morgan) and the previously mentioned attack animal, Tracker, who have a strictly enforced zero tolerance policy for illegal immigration, particularly when local authorities clearly don’t give a damn. It eventually comes down to Sam going up against Moises (Bernal), who is trying to reunite with his son in America. Politically, it’s as shallow as you would expect, with Sam an unshaven alcoholic, whose pick-up truck sports a “Don’t tread on me” sticker. Yeah, if you’re looking for nuanced debate on the complexities of immigration, this isn’t it. 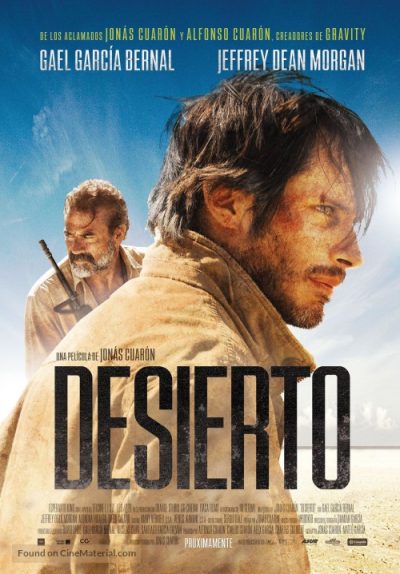 That doesn’t necessarily make for a bad movie, however. The middle chunk, depicting the remorseless pursuit and slaughter of the majority of his targets, is as chillingly executed as the victims are. Cuarón has obviously picked up some good cinematic tricks from his father, Alfonso, even if this is no Gravity or Children of Men [for what is?]. The main issue is one of pacing: after the carnage, you are largely left with Sam following Moises through the desert, and that gets old well before the final confrontation. I never thought I’d miss a dog in a film so much either, but Tracker adds an extra dimension to proceedings which is lost after his departure, and missed. Must say though, it does probably make him the first dog to demonstrate a true flare for the dramatic…

Bad puns aside, it is somewhat contrived with Sam depicted as an elite level marksman at the start, only to achieve a Star Wars Stormtrooper level of accuracy, whenever this is necessary to the plot – in particular when aiming at Moises. As a viewer, I was inclined to forgive this, or at least work with it, given the splendid landscapes and impressive photography, both of which are a significant cut above standard for the action genre. The script and characters? Not so much. Both are thin, to the point they might be sufficient for a 30-minute TV episode – providing it was aired on a commercial channel. However, I look forward to seeing what Tracker does in his career going forward, and hope he is able to find material that’s appropriate to his undeniable talents.