A good concept, and an excellent trailer… So where did it go, if not exactly wrong, than some way short of exactly right? I think a lack of innovation is the main problem here. It owes so much of a debt to Assault on Precinct 13 that John Carpenter should be collecting rent. While there’s nothing fundamentally flawed about adopting a faux grindhouse approach, the best entries in that sub-genre, e.g. Hobo With a Shotgun don’t use that as an excuse to abandon invention and imagination. While this is by no means poorly executed, and possesses a particularly fine cast of veteran actors, it is too much in thrall to what has gone before. About all it has new to offer, is particularly dim lighting. Seriously. the picture at the top is entirely representative. They should have called this Vet We Do In The Shadows. 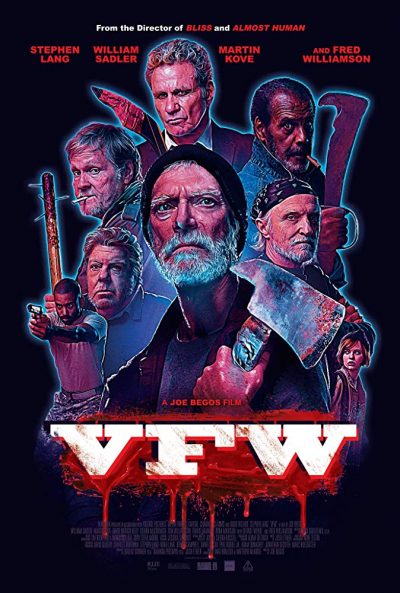 It’s set in a somewhat near future, when urban life has all but collapsed, and the street drug of choice has become “Hype”. Its users are not nice people at all, and nor is Boz (Hammer), the man in charge of peddling it. After he dupes an addict into leaping off a roof, her sister, Lizard (McCormick), takes revenge by stealing Boz’s stash of Hype and high-tailing it. He unleashes a tidal-wave of junkies after her, and she scurries into the local VFW post, looking for shelter, with her pursuers running right behind. There, having a quiet drink, are a bunch of grizzled military veterans, including Fred (Lang), who runs the joint, plus customers Walter (Sadler) and Abe (Fred Williamson). The first wave of Boz’s crew quickly find out, in the immortal words of Burt Ward, that they just “Broke into the wrong goddamn rec room.”

The rest take a more circumspect approach and lay siege. To the windowless and poorly-lit building. In the middle of the night. So, while the lack of lumens makes sense, it’s still an issue for the home viewer, whether due to poor cinematography or a bad transfer. You get the feeling there’s quite a lot of gory violence going on – if only you could see it. Instead, you’re left to figure out who’s doing what and to whom. But if you assume it’s the vets, inflicting it on the street-punks, you’ll be right, more often than not. The positives, perhaps surprisingly, are more on the character and dialogue sides. I could have watched the trio of Fred, Walter and Abe swapping stories for the entire running-time, and probably not got bored.

The contrast between them and the blandness of the young soldier who has the misfortune to pop in, shortly before things kick off, could not be more obvious. Even Boz seems like a whippersnapper in comparison, and I kinda wish they’d gone with someone equally as experienced on the dark side. The results are somewhat entertaining, though likely are considerably more successful if you’ve never seen Assault. Or any other siege movie, to be honest.