I doubt there has ever been a clunkier title in the history of British cinema. I mean, it doesn’t exactly incite me to rush to the cinema, and it’s hard to think how it might have done so, even at the time of its release. The French and Italian titles are better, translating respectively as “The Man in the Glass Mask” and “Crime in a Black Suit”. Admittedly, at the time, scuba gear was something of a novelty. Indeed, an important plot development is triggered by a poster for Jacques-Yves Cousteau’s ground-breaking documentary, The Silent World, which introduces the titular aquatic device to the movie’s young heroine. Mind you, it doesn’t help that the smartest character in the film appears to be a dog, which doesn’t say much about the Italian police force. But I’m getting considerably ahead of myself.

This isn’t a “whodunnit” in any traditional sense, since we know who the killer is from the opening scene. Paul Decker (Van Eyck) carefully “suicides” his wife by gas in their villa on the Italian Riviera, taping the windows shut and locking the door from the inside before turning on the taps. He then retreats through a concealed trapdoor in the floor to wait things out, using his snorkel and a pair of long air-hoses to supply him with oxygen. This succeeds in fooling the authorities, but not his step-daughter, Candy (Miller). She was already convinced Paul drowned her real father, in order to marry her mother, and now believes, rightly, that he offed Mum as well. 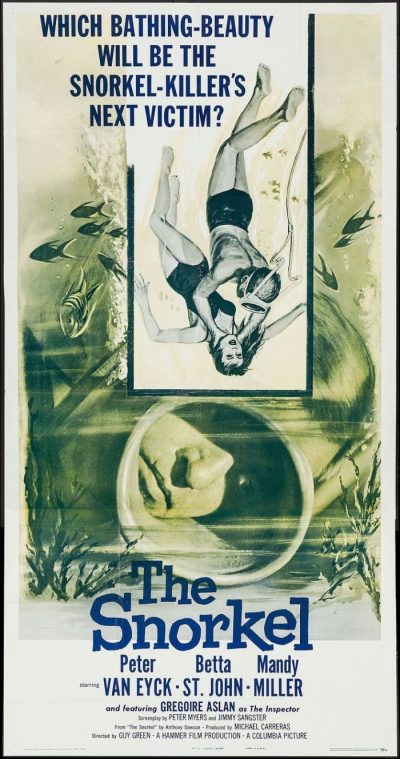 Getting anyone else to think she’s not just being a hysterical teenager, is a different matter, however. Not least, because he has a cast-iron alibi, backed by stamps in his passport, showing he was across the border in France at the time [this clearly taking place several decades prior to the Schengen Agreement]. His sub-aqua activities might explain that contradiction as well. Though when Candy’s canine Toto keeps insisting on attempting to draw attention to Paul’s swimming mask, by using it in an impromptu game of fetch, it’s time to give the pet an express trip to doggy heaven. Guess Paul is a cat person. When Candy herself starts getting too close to the truth, and his attempt at another swimming “accident” is foiled, it’s time for stepdad to break out the snorkel again.

It’s all kinda dumb and not particularly convincing. As ways of killing someone, this has to be ranked among the most unnecessarily complex. It potentially wouldn’t work either, as snorkels with super-long tubes such as here are increasingly impractical. The local cops are also staggeringly incompetent, not apparently bothering to carry out an autopsy before pronouncing Mrs. Decker’s death a suicide. If they had, they’d have found the drugs with which her husband apparently knocked her unconscious (he later pulls the same trick on Candy). But why not just up the quantity and kill her with an overdose, rather than this byzantine snorkel scheme, which also requires the villa to retain gas lighting for decades after electricity has become widely available.

Paul’s motive is never made clear either. Is it money? Desire to hook up with Candy’s nanny, Jean Edwards (St. John)? We don’t know. And Candy isn’t exactly subtle in her pronouncements about Daddy’s guilt either – though given her age, her forthrightness is perhaps understandable. However, you’d think that, given she now feels her stepfather is a multiple murderers, just a little caution and discretion might be the better part of valour. Instead, her opening line in the entire movie is “He killed her!”, and her first words to Paul are “Didn’t she give you enough money? Was that why you did it?” I know from personal experience how insufferable teenage girls can be when they put their mind to it. But if the above has been her attitude since she witnessed him killing her real father, it’s a miracle Candy survived as long as she has, without meeting an unfortunate demise.

[Random fun facts about actress Mandy Miller, which I might as well drop in here. She had recorded the original, much beloved version of Nellie the Elephant two years earlier. The Snorkel would be her last feature, though she continued appearing in TV shows, including an episode of The Avengers, until 1964, retiring at the ripe old age of twenty. She’s also the aunt of Amanda Pays from Max Headroom] 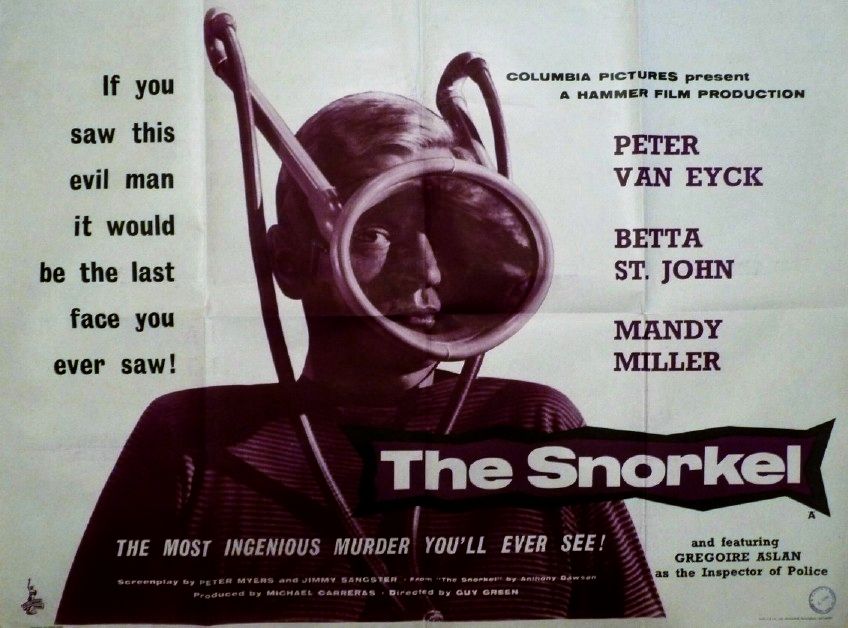 It’s all terribly British and upper-class, with people being incredibly polite and well-mannered to each other, rather than doing anything effective. However, the film almost manages to salvage itself with what appears to be a stunningly-bleak ending, which suggests the Candy apple has perhaps not fallen too far from the tree, step-daughter or not. I say, “almost”, because it then walks itself back, with a tacked-on coda which undoes entirely a potentially memorable finale. This feels so jarring, I have to wonder if the BBFC – known to have pre-vetted some Hammer scripts for troublesome content – might have objected, and demanded writer Jimmy Sangster alter the ending. While it does appear this was a late addition, the changes appear to have been internal ones.

It is notable for being one of the rare occasions where Hammer would go overseas to shoot, though the back-projection used for some of the car footage leaves a bit to be desired to a modern viewer. Shot in the town of Alassio, particular use was made of the Villa della Pergola, now a luxury hotel. Appropriately, given the Hitchcock-esque nature of this film, the Villa was also used as a location in Alfred Hitchcock’s first feature, The Pleasure Garden. Director Green had won an Oscar for cinematography in 1945 for his work on David Lean’s Great Expectations, but his own career at the helm was considerably less distinguished. It probably peaked with the film adaptation of John Fowles’s The Magus, in 1968, though he’d continue to work on TV movies until the mid-eighties.