More than half a century before Fifty Shades of Grey, the world was scandalized when Story of O was published in 1954. Over the decades which followed, it came under particularly heavy criticism from feminists, who objected to its objectification, if you see what I mean, with many believing it the product of a male author. When the film was released in France, feminist groups picketed a magazine which had the temerity to write about it, and the book was burned on American campuses. All of which became a bit embarrassing when, in the mid-nineties, the pen-name of Pauline Réage was confirmed as belonging to a woman, Anne Desclos. Her lover had said no woman could write an erotic novel, and she wanted to prove him wrong. Mission accomplished, I guess. 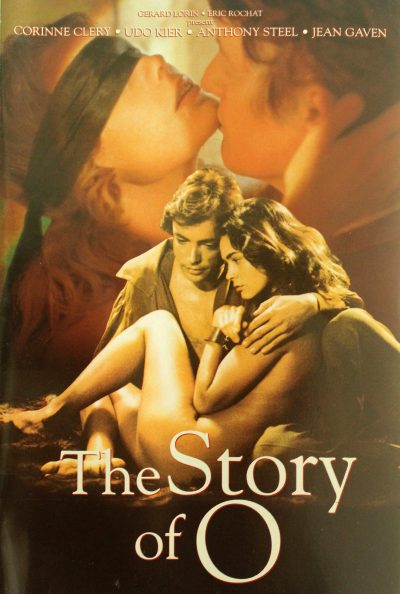 Jaeckin chose this as his follow-up to his smash hit from the previous year, Emmanuelle. Which is interesting, since the author of that book, Emmanuelle Arsan, was allegedly inspired to write it, by Story of O. From a current perspective, casting Kier as the male romantic lead seems odd, given his long-standing reputation for playing… well, the word “weirdos” seems fitting, all the way back to Baron Frankenstein in Flesh For Frankenstein. But at one point early in his career, Kier says he was apparently called “the most beautiful man in the world.” Admittedly, he does look quite dashing here as Rene, driving girlfriend O (Cléry) off to a chateau near Paris, to be schooled in the ways of sado-masochism. And then handing her over to Sir Stephen (Steele), for what’s basically an advanced course on the same topic.

I can’t deny the film’s beautiful cinematography, and in general, it oozes quality in almost all the technical aspects. Pierre Bachelet’s soundtrack is particularly classy. But, Christ, is it boring. I suppose I’m hardly the target audience, not at all being into That Sort of Thing. But I was hoping it might provide some insight into the psychological appeal of the S/M scene, so I’d come away thinking, “Well, that’s not my cup of tea, but I can see how it might be, for some people.” It really doesn’t do so: hell, Nekromantik delivered more understanding of its fetish, and that was considerably further out there. Nor is there much sense of progression or development. While O is certainly changed by her training, I’d be hard pushed to put into words how, or even whether or not it’s for the better.

I suppose there’s something being said here about freedom of choice. Nothing is done to O, for which she has not previously given her agreement. But how much free will does she genuinely have, since she appears to be entirely in thrall to Rene? Her willingness to submit to anything, purely in order to demonstrate her devotion to him, seems to be pushing the boundaries of informed consent a bit. But who are we to criticize? After all, no-one’s being hurt h… Er, well, that’s not quite the case, obvs. But you know what I mean. All told, despite the copious voice-over work trying to explain itself, this is less thought provoking than background wallpaper. If you like your wallpaper made of pubic hair.