Mr. Brooks is better known as former WWE star CM Punk. but once you can get past that, he’s fairly effective in his feature debut – even if his impressive tattoos are somewhat of a distraction. The difference between pro wrestling and horror films is probably less than you’d think… He plays Chicago lawyer Don Koch, who is out in the suburbs renovating an old mansion he has just picked up for him and his pregnant wife, Liz (Dunn). But Don has… issues, including but not limited to alcoholism and spousal loyalty. 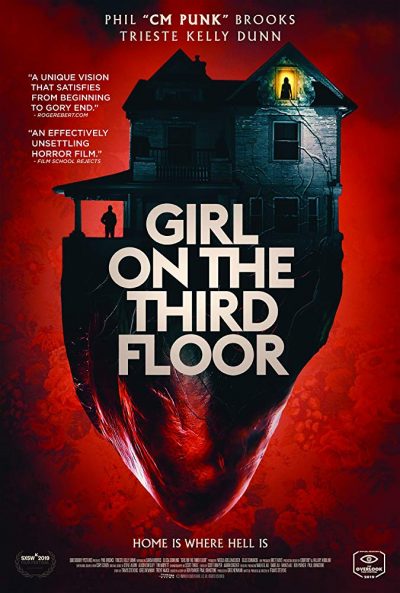 Which is a bit of a problem, since his new house has an equally dubious history, having formerly been one of Illinois’s most famous brothels. And the spirits of those who lived and died there are still hanging around, waiting for equally troubled souls like Don to show up, who can be lured into their grasp. Barely has he started work, before the bizarreness starts. Weird body-like fluids leak from the walls, sockets and pipes, marbles apport out of nowhere, and neighbour Sarah (Brooks, no relation) pops round for a cup of coffee and some infidelity, then doesn’t take kindly to Don’s subsequent efforts to cut her out of his life. #BunnyBoiler. On the plus side, she’s clearly looking to start up a dog washing business, hohoho.

It’s all very much reliant on the lead character being oblivious to warning signs which would quickly send anyone who has seen a haunted house movie, off to the nearest Motel 6. I lost track of the times we yelled “GET OUT!!!” at the screen. There doesn’t appear to be much rhyme or reason about the apparitions, when they appear or what they do. Yet that’s fine, for it seems Stevens is going for a nightmarish feel, in which anything can happen, and he certainly succeeds at generating a slew of icky moments. This often feels less like you are inside a haunted house, than inhabiting a living entity. It also slides sideways for its final act, the focus shifting from Don to the more morally-robust Liz, who is better equipped to handle the horror the house throws at her. Not an easy feat, swapping leading characters so late, yet Stevens pulls it off.

In some ways, this is a throwback to horror from a more moralistic era, with Don being punished for his sins (in a way grossly disproportionate to his “crimes”). What happens to him is not all that different from Jason murdering teens for having sex and taking drugs, with the mental torment he undergoes, replacing the pre-slash stalking. This, and his obstinate refusal to nope the fuck out of there, allows us viewers to feel both intellectually and morally superior to Don, as well as happy in the knowledge that bad things only happen to bad people. If, obviously, that’s an overly simplistic approach, it’s executed with enough swash and bravura to make for an elegantly creepy time.