I went into this knowing very little about it, having been told that was the best approach. About all I knew was the glowing accolades, with multiple places declaring it the best film of the year. On that basis, I’ll confess to being rather disappointed, finding it little if any better than Bong’s previous work which I’ve seen, Snowpiercer and Mother. [Okja, a straight-to-Netflix film – and I quote Wikipedia – “about a girl who raises a genetically modified superpig,” has not yet seized my attention for some reason. Probably to do with it being about a girl who raises a genetically modified superpig.] I do agree it’s probably best to go in with minimal advance knowledge, so progressing past this point will presume you’ve either seen it, or don’t care. 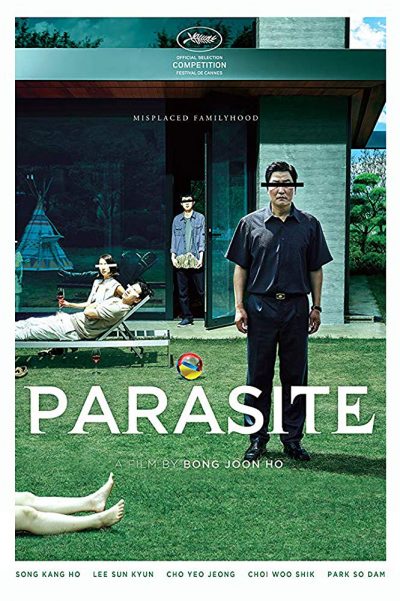 Still here? Okay, obligatory synopsis. The Kim family live in a particularly shitty apartment, barely meeting ends meet. A lifeline is thrown when a friend of son Ki-Woo (Choi) gets him an introduction as tutor to the daughter of a rich family, the Parks. Once embedded, Ki-woo gradually brings in the rest of his family: sister Ki-Jeong becomes an “art therapist” to the Park’s son; dad Ki-Taek (Song) gets employed as family chauffeur; and mom Chung-Sook takes over as the housekeeper, deposing the long-standing incumbent. Life seems good. Until one rainy night, when the old housekeeper shows up, revealing a secret below the basement and kicking into motion a train of events which will lead to the collapse of both Park and Kim clans.

I found this actually at its best before the grand reveal, though there are still some problems, scriptwise. We are supposed to believe that the Kims, so useless at life they can only afford the worst of lodgings, and literally incapable of folding pizza boxes competently (top), are capable of pulling off an elegant multi-person confidence trick. But given that conceit, it’s an elegantly constructed process, not least because there seems something “off” about the Parks and especially so for the immaculately dressed patriarch, Dong-ik (Lee). There’s nothing quite like the glorious moment when you realize you’re heading inexorably towards finding out what’s beneath the basement, and your mind is feverishly generating possibilities: everything from a serial killer’s lair to a freakin’ UFO, I kid you not.

Then you see the reality and… “Is that it?” I can still taste the bitter disappointment, as I realized we were, instead, just in for another round of Bong banging his class war drum again about the unfeeling callousness of the “haves”. It’s a cinematic version of a Bernie Sanders speech. “The Parks deserve what they get,” seems to be part of the message. Yet I’m pretty sure Bong’s lifestyle is considerably closer to the Parks than the Kims, given his father was a graphic designer, and his siblings include a university lecturer in English lit and a fashion designer. I doubt folding pizza boxes formed a significant part of his upbringing.

I could still appreciate the way he throws so many genres into a blender, and the look of the film is great. What’ll stick in my mind is the complete contrast between the tiny, messy, crowded home of the Kims, and the near-clinically clean mansion of the Parks. Though it’s the former who have the tighter bond, hanging out together in a way apparently alien to their rich employers. Money can’t buy familial love, it appears. That’s a moral I’d be more inclined to get behind, rather than the political grandstanding, to dubious and uncertain effect.