This apparently the third in the franchise, though information about its predecessors is hard to come by: I think they were films made for television, screened on the Asahi network in 2001 and 2002. It doesn’t appear having seen them is necessary, not least because this opens with a quick gallop to get new viewers like me up to speed, explaining the title. Turns out cop Kinako Endoji (Mizuno) was in a relationship with the titular shooter, Wong Kai-ko (Uchimura), which ended with him sent back to China to serve a life sentence of hard labour. But when terrorists start shooting random citizens, demanding a ransom of 50 billion yen, Wong is brought back to apply his expert knowledge to the investigation. 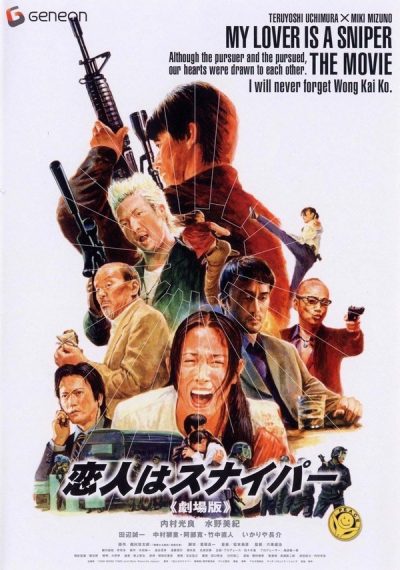 Initially, suspicion falls on a Chinese triad, the 1211. But they are so incensed by the claim they actually break Wong out of federal custody, so he can investigate more freely and prove their innocence. [Admittedly, federal custody seems to consist of two guards, so there’s not much effort involved in this] Attention then turns to Shogo Jinguji (Abe), though for some reason which the subtitles fail to make clear, the authorities are hamstrung in their efforts to investigate him. It’s something to do with him being a police attorney, though why this qualifies him for something approaching diplomatic immunity is never explained. Fortunately, he falls into the Bond school of villainy, and is happen to explain his plan in detail as necessary.

Meanwhile, Wong is running around, assisted by Endoji, foiling the plots of Jinguji and sidekick Fan Huo-qing (Nakamura), such as a needlessly complex effort to blow up a subway train. I mean, they even go to the lengths of building an entire model railway set, complete with miniature explosion, onto which Wong conveniently stumbles. It all ends in the way you’d expect, with a sniper duel, though it’s enlivened considerably by Endoji simultaneously fighting her way, hand-to-hand, towards Jinguji. Indeed, the martial arts here are a pleasant surprise, Muguruma letting his participants do their thing in composed medium shots and relatively lengthy takes, which show off their skills nicely. On the other hand, just about everything else is more or less underwhelming: there’s certainly not much loving going on here, despite the title. The word “former” probably should have been in there somewhere.

The central idea – terrorism for financial gain – is interesting, and perhaps more plausible in these days of Bitcoin and other untraceable crypto-currencies. Yet it isn’t developed quite well enough to work. For instance, there’s a subplot about the terrorists selling amulets that offer immunity, which is, frankly, a bit silly. What may stick in my mind most is the remarkable tolerance of Japanese police. If a confessed killer came out of a building into the middle of a police blockade, waving their gun around meaningfully, they’d not make it two steps before the ensuing hail of bullets. They certainly would not be allowed, as here, to wander about in slow motion, for what feels like forever, but is merely killing time until the dramatically appropriate point for a cut to black and gunfire sounds…