Back in the days when I was in the Church of the SubGenius, part of their theology involved Yetis. But these were not the sub-human anthropoids you’d expect. To quote from the SubGenius Wiki: “Originally the Yeti had a vast civilization on the lost continent of Atlantis, the jewel of which was their wondrous capital city of Mutantis, and it was here that humans were created through genetic engineering by Yeti scientists. The Yetinsyny, or SubGenii, came about through the actions of a perverted rogue Yeti scientist who actually mated with the human test subjects, fathering the Yetinsyny half-breeds, the SubGenius race.” I was reminded of those super-powered Yeti here, and wonder if this film was some kind of inspiration. For the snowmen are less abominable than misunderstood, and super- rather than sub-human.

Despite this, it’s very much the least of the adaptations on which Nigel Kneale and Hammer collaborated. This was another cinematic remake of a TV program, in this case a one-off (and now lost) production from 1955 entitled The Creature. There had been a recent resurgence of interest in the topic of the Yeti. Sir Edmund Hillary and Tenzing Norgay reported seeing large footprints on their ascent of Mount Everest in 1953, and the following year, the Daily Mail reported on a supposed Yeti scalp held in a Tibetan monastery. This led to Kneale’s production which combined live scenes with pre-recorded mountaineering footage shot in the Alps. Cushing played the same role as here, alongside Stanley Baker. 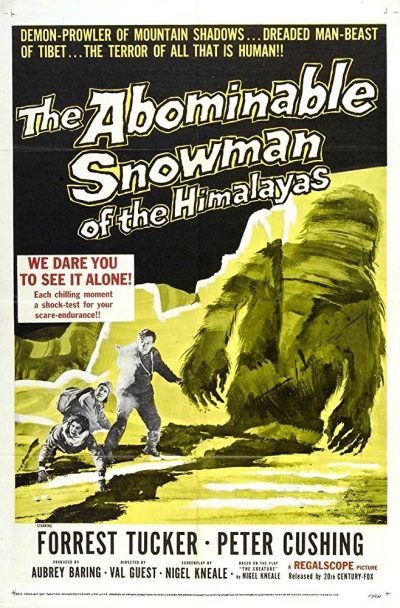 Baker was replaced by Tucker for the film version, playing yet another version of the brash American apparently required for the market. His character is Dr. Tom Friend, who is on an expedition to the Himalayas to prove the existence of the Abominable Snowman by capturing one, believing this will bring him both fame and wealth. He meets the more scientifically-minded Dr. John Rollason (Cushing), a botanist who is already there, working out of a Buddhist monastery. He had sworn off climbing, following a near-fatal incident, but scientific curiousity draws him to join Friend’s expedition, despite the qualms of his wife (Connell).

And, it turns out, her fears are well-founded. The harsh environment proves treacherous, with Rollason and Friend also perpetually at odds over the purpose of the expedition, not least after one of Friend’s traps successed only in catching another member of the party. Eventually, though, they do find signs indicating the presence of a large hominid, and Friend manages to shoot and kill one. But this turns out to be a bad move. For the Yeti have plenty of capacity for intelligent thought, as well the ability to project into human minds, making both men hear things. Needless to say, they’re not happy about Friend’s murder of one of their number, and will happily take vengeance on the dwindling survivors of the party, and Friend in particular.

It’s certainly a different take on the Bigfoot/Sasquatch/Yeti legend, but I can’t say it’s a very convincing one. It doesn’t help that the titular creature is barely glimpsed over the first 95% of proceedings. And when it finally shows up, it couldn’t be more obviously “man in a mask,” if it still had the price-tag dangling off its collar. Guest’s reticence about it over the preceding 80 minutes suddenly makes a great deal of sense. It might have been better if Kneale had not bothered with the yeti at all, and just had the party disintegrate and turn on itself, as happens in particular between Rollason and Friend. As the body-count mounts, and the American insists on continuing the hunt, his British partner becomes increasingly critical, blaming Friend for the deaths.

As ever, and no matter how silly the concept, Cushing sells it for everything he’s worth “I’m wondering how old that face is. It’s seen a long life – longer than ours, I should say. A hundred years, perhaps more. This isn’t a face of a savage thing. It’s gentleness. Suppose they are not just a pitiable remnant waiting to die out. They’re waiting… here’s something the Llama said, about taking thought of man’s successors. I didn’t understand then, but suppose – we are the savages?” But even he isn’t able carry the weight, when he’s getting little or no help from Tucker’s loud-mouthed Yankee [an apparent trend in Hammer’s Kneale adaptations]. Allegedly inspired by adventurer Tom Slick, his arrogant yelling more than outstays its welcome. 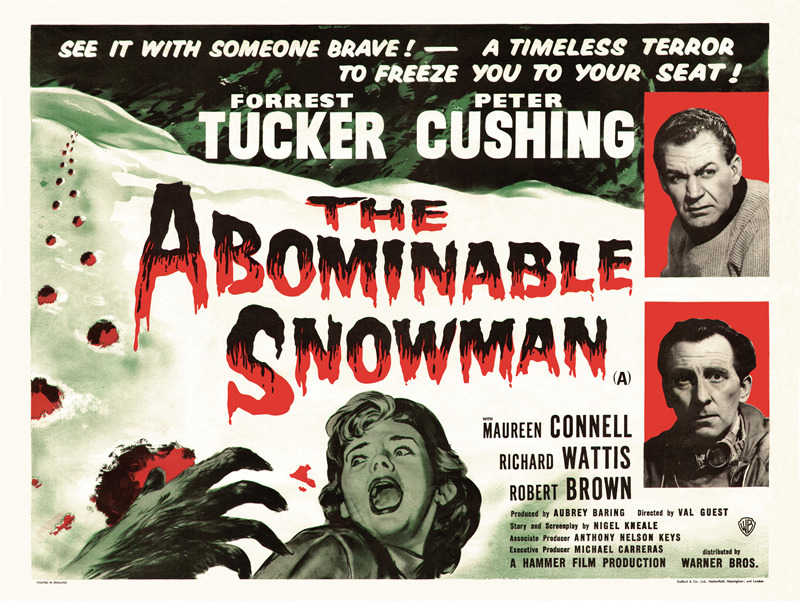 Time has been even less kind to some of the attitudes. One of the expedition complains about their location: “I don’t know what’s worse about it. The stink of everything, or the ignorant natives, or the filthy food they eat, or what.” That isn’t condoned by the film, which clearly empathizes more with Rollason’s tolerant world-view. But it is hard for a modern viewer to accept this is promoting tolerance, given some especially egregious instances of yellow-face. The Lama of the monastery is played by German actor Arnold Marlé, and Sherpa guide Kusang by Wolfe Morris, who was born in, um, Portsmouth. A product of its time, undeniably. Yet still awkward to watch.

It doesn’t help that the studio sets are glaringly blatant, with their fake boulders and artificial snow. They don’t mesh at all with the genuine mountaineering footage, shot in the Pyrenees and used in long-shot. As a result, there’s little or no sense of peril, because it’s patently clear that the actors were safely ensconced on a Pinewood film set. In 2013. there were rumblings that “New Hammer” were going to remake this, off a script by Matthew Read and Jon Croker, but nothing seems to have come from it. While it is the kind of film I tend to think should be remade – one with scope for improvement, putting it mildly – it’s likely telling that Peter Cushing’s second movie for Hammer has been all but forgotten, when compared to his first and third films.