With a synopsis which starts off, “After witnessing the apocalypse from a research bunker in the Scottish highlands…” I was largely sold. Been on a bit of a kick of films supposedly set in Scotland of late, though the key-word there is “supposedly”. And the chances of this one actually having made it north of Hadrian’s wall promptly nose-dived, when an opening caption wasn’t even able to spell the place correctly, calling it “Scottland”. Do you want an F-grade, people? Because that is how you get an F-grade… 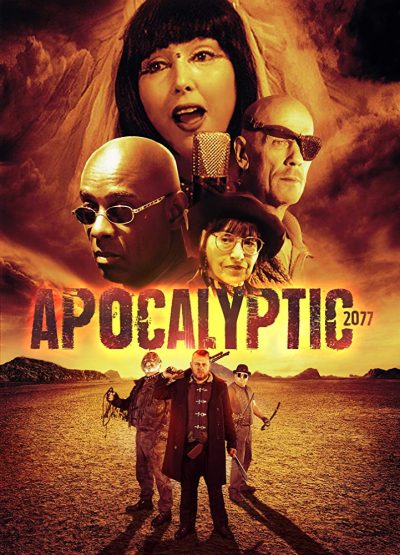 After that wobbly start, the first half is more or less a one-man show. IT engineer Jack Chyser (Flamson) takes up a new post at a remote meteorological station, and with no interest in going home for Christmas, is the only man left there. Which is when the apocalypse happens: though the “witnessing” mentioned above is a bit of a stretch, considering he’s buried deep underground. All he knows, thanks to the facility’s computer, JIM, is that there are lethal levels of radiation. Still, there’s plenty of food, so he hunkers down and waits until the radiation disperses. He passes the time playing bowling on an old Atari, bonding with JIM, and learning kung-fu from martial arts VHS tapes.

Finally, it’s safe for Jack, suspiciously unchanged by his lengthy ordeal, to head out into a world, suspiciously unchanged by the apocalypse. He brings JIM with him, now mounted on a small RC car. And the film then takes a right-turn. While civilization as we know it may have ended, the lethal radiation doesn’t seem so much to have killed off everyone else, as made them regress into low-rent steampunk cosplayers. It’s this motley collection of survivors, that Jack has to deal with, as he tries to make his way towards the reported refuge of Salvation City. He quickly discovers that thinking he could learn kung-fu from martial arts VHS tapes, was a bit of a mistake.

The poverty-row production values are something I’d be prepared to overlook. However, the problems run considerably deeper – and I don’t just mean that inability to spell the country where the film takes place. It’s obvious gaffes like cutting from Jack walking through a forest, to him in the middle of sand dunes. It’s the way it feels like two completely different films spliced together – and still only runs 64 minutes. Or the lack of any sense of escalation in his encounters with the various flavours of weirdoes. I’ll admit, I did laugh at how it ends up being his Atari bowling skills, honed over the best part of a decade, which come in handy, not the combat skills. When that’s the film’s highlight, you have an issue.

It shows the kind of quirky humour, which the film needs in far greater quantity. As a bumbling hero, Flamson does occasionally pull it off. But Jack is a persona who needs considerably more to be done with him to hold the audience’s attention. Card-games with imaginary friends don’t cut it.