Kinda surprised to see some of the vitriolic reviews this received on its release. Sure, nobody will mistake this for a classic, but… It’s Fantasy fucking Island, people. One of the cheesiest of seventies television shows. You should not be expecting Shakespeare. With more reasonable ambitions, I found this perfectly adequate entertainment. As, it seems, did quite a number of people. On Rotten Tomatoes, it sits at 7% positive with critics, but 49% positive with audiences. Is this indicative of a cultural divide? Or just the usual sniffy reaction to the horror genre? Discuss. 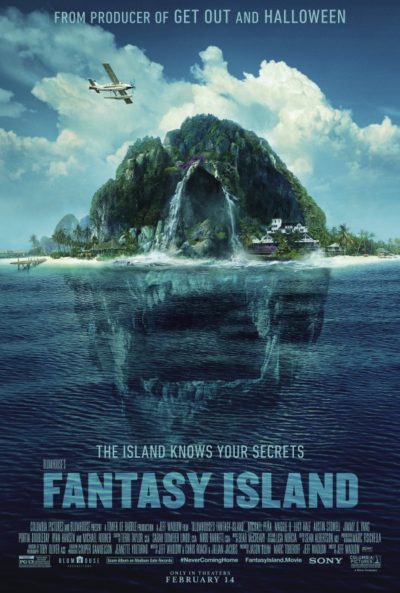 The concept here is the same as the show: an island where your dreams are granted, by its owner, the mysterious Mr. Roark (Peña). Except, as anyone who has ever played D&D knows, having your wish granted is not necessarily a good thing… In this case, there are multiple people showing up simultaneously, rather than the one or two typically present in the show. There’s Gwen Olsen (Q), who regrets turning down a marriage proposal. Melanie Cole (Hale, looking like a low-rent Drew Barrymore), who wants revenge on the bully she blames for ruining her life. Patrick Sullivan (Stowell), who wants to achieve his dream of being a soldier. And the Weaver bros, who just want to party. They’ll all get what they want… And then discover it has its drawbacks. But more interestingly, find out they are more connected than they seemed.

There are certainly issues. It’s 109 minutes, to start with. There’s not a lot of slack; indeed it feels more like it’s trying to cram too much in, especially in the final act where it kinda collapses under its own weight, as it tries to explain itself too much. I suspect excising one of the stories from the previous paragraph might have reduced the sense of over-stuffing. It also needs to embrace the inner darkness, intrinsic to the concept. Released as a PG-13,  I doubt the few extra frames of gore present in the unrated version (literally – in total it runs less than 18 seconds longer) would have made much difference. It’s as much an attitude adjustment needed. This should have been considerably more mean-spirited, in terms of punishing characters who are all entitled, to a fault.

However, there’s never a dull… well, if not quite moment, never a dull 10 minutes, I would say. And the performances are relatively decent, at least for this kind of thing. None of the characters are actively annoying, and Gwen manages to have a couple of moments that appear to have strayed in from something other than a low-budget horror film. A particularly haggard Michael Rooker shows up as a spanner in the works, providing good value as ever. Yeah, I’m not going to claim this is a under-appreciated gem. Yet, any film where we get to yell “Dee plane, boss! Dee plane!” at the screen on multiple occasions, is never going to be a complete waste of time in my opinion.