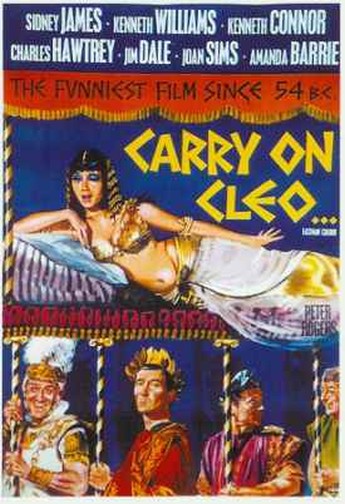 “Infamy! Infamy! They’ve all got it infamy…” Perhaps the single best-known line from the entire series, as uttered by Julius Caesar (Williams) after an assassination attempt – even though it was actually written by Frank Muir and Dennis Norden for their radio show, Take It From Here. No matter, for did the series ever have better casting than in this entry? Beside Williams, there’s James as Mark Anthony, Connor as witless British craftsman Henghist Pod (who only makes square wheels) and Barrie as Cleopatra: all perfect in their roles. The production values are also higher than usual, helped by leftover sets and costumes from big-budget bust Cleopatra; the humour remains as lowbrow as ever, however, such as Hengist’s wife being named Senna.

The plot actually makes more sense than some, with Pod mistaken for a great fighter, after an unfortunate incident involving the Vestal Virgins, and subsequently employed as Caesar’s bodyguard. Meanwhile, Anthony falls for Cleo, and agrees to kill Caesar in exchange for her favours. It’s all very entertaining, and without a dull moment, though certainly, could never be mistaken as anything other than a 40-year old comedy, possessing its full share of groaners with whiskers on them. However, even the lines apparently rescued from Christmas crackers, are delivered with such enthusiasm and timing, that they still work surprisingly well. Definitely one of the top entries, with everything coming together beautifully.