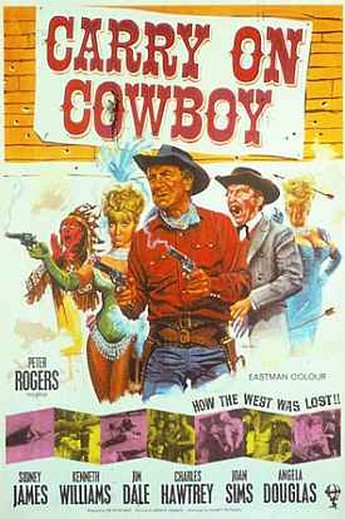 The Rumpo Kid (James) takes over Stodge City, and its mayor (Williams) sends for help. Unfortunately, this comes in the form of sanitation engineer Marshall P. Knutt (Dale), rather than any real assistance. Still, take what you get, and Knutt is forced into duty anyway. Though Bob Hope’s The Paleface would be an obvious inspiration, this bears some striking resemblance to F-Troop, an American sitcom that began six months before Cowboy was released in the UK. Among the common elements: an inept bungler sent to take charge in a remote town; a local Indian tribe (all played by non-natives!) who need to be bribed to attack; and a girl who’s more competent with a gun than the men. While fairly standard comic contrivances, it’s an interesting overlap.

Credit to the producers for coming up with a credible stand-in for the Wild West, turning Surrey countryside into prairie, complete with cacti. Less successful are some of the accents: James does okay, but most of the others drift between Ealing and Tombstone. Jim Dale’s apparent efforts to channel the spirit of Norman Wisdom irritate more than they amuse, and Williams isn’t up to much either. The rest of the cast, however, are decent to strong, with Charles Hawtrey stealing the show, as the most non-PC depiction of a chief you’ll ever see. Look out during the Indian attack on the stagecoach: the arrow is stuck to the front of the driver’s shirt, and he’s simply holding it down until he gets “shot”! Ah, the joys of DVD…