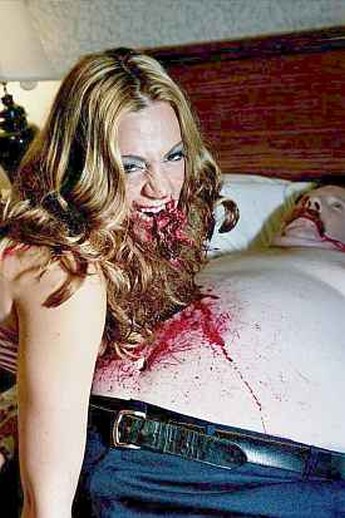 Just your average love story, y’know: girl meets boy… Sorry, my mistake: it’s girl eats boy. Pandora (Bacelar) has an insatiable craving for human flesh, so works as a hooker to provide her with an endless supply of fresh meat. When she meets Jeffrey (Dillon), another lost soul, the two bond, each finding their missing piece in the other. But someone is hunting Pandora, with extreme prejudice, chewing their way through the contacts she’s made – getting ever closer and leaving a trail of bodies in their wake as well. Where are the cops in all this? Apparently uninterested; then again, this is New York, where bodies – even badly-chewed ones – are apparently a dime a dozen. Cool aerial footage though.

A nice idea, it lacks enough development to keep 100% interest. For instance, we see Jeffrey invite a hooker to post-coital dinner, and get spurned, establishing that he’s a total loser. But it happens again. And again. And gets tedious. The same goes for Pandora’s cannibalistic tendencies: see one guy nibbled to death, you’ve seen them all. There are some nice touches, such as speculation that Pandora is a figment of Jeff’s psyche and doesn’t exist. More could certainly have been done with that. Additional thought into her origins could have helped too: make her an escaped government experiment, an ET, or something. As is, her apparent immunity to – let’s say, “stuff” – is kinda baffling. Still, the acting here is mostly solid, and plenty of the old fallbacks, nudity and gore, help distract from the cracks in the screenplay. Even if not exactly shooting for the moon, as low-budget horror goes, this…goes.