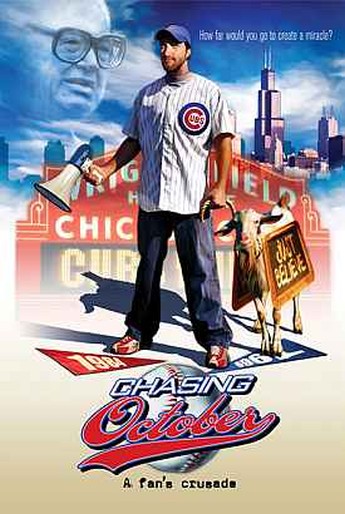 I find films that play with perceptions of “reality” fascinating – even when they suck, as in Blair Witch. The question here is, how much Matt Liston is genuine, and how much he’s playing a part. The movie depicts his obsession with the Chicago Cubs and his quest to get them the World Series win which has eluded them for nearly a century. And when I say, “obsession”, the most painful moment is when his girlfriend pops the nightmare question feared by all dedicated fans: which he loves more, her or the team? He’s on a par with Jimmy Fallon’s character in Fever Pitch, and that rom-com is a good touchstone here, for its mix of passions, even though the Cubs season ends in spectacular implosion. The film is at its best when capturing the glorious nature of pure, devoted fandom, as when Liston visits a bank, seeking $20m to boost the payroll. Or seeking to interview the head of the team owners, the Tribune Company, whose penny-pinching ways are blamed by many fans for the Cubs’ failures. More of this Borat-like confrontation would have been welcome.

Other notes don’t quite ring true: for instance, the avowed poverty of the character as he makes his documentary. This doesn’t match the expensive soundtrack, from Pearl Jam to Frank Sinatra, or the copious footage of games, which can’t have been cheap either. While most people are playing themselves (his real parents, for example), they sometimes come across as forced or obviously scripted. Though the moments which work, are often brilliant, as when his girlfriend discovers a $2,000 bill from a jeweler isn’t what she thought. For a non-Cubs fan, or even a non-baseball point of view, there’s plenty to enjoy, because fanatical fandom is much the same, regardless of the color of style of shirt it wears. We may not have the same degree of desperate self-loathing as Cubs supporters – who judging by their comments here, feel the same way about their team as a badly-treated dog feels about its owner. But the hope, and its cruel dismantling by the hard facts of reality, is something more or less familiar to all fans. And it’s that which made this film resonate with me.

[An extended version of this review first appeared at AZ SnakePit]