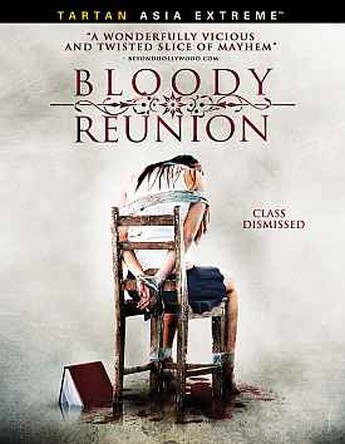 A wheelchair-bound teacher holds a reunion for her former pupils: all of whom, it appears, hate her with a passion. What could possibly go wrong? Well, this is Korean, and going by their cinema, it appears no-one holds a grudge better: see Lady Vengeance for an example. So, you’ll not be surprised to learn that the cake and polite conversation are soon replaced by a maniac with a fondness for, oh, stuffing razor-blades and boiling water down people’s throats, or stapling their eyes open. Sadly, it’s not as much fun as it sounds, not least because it’s about 45 minutes before the first body hits the floor, a lack of pacing almost unforgiveable in the slasher genre. However, that’s a minor criticism compared to the series of ludicrous and eventually laughable twists that pepper the second half. Dario Argento would be proud.

The characters are not badly-drawn, and there’s a lot of hand-held camerawork which reminded us of 24, of all things, thanks to the frequent zooming. [Actually, Jack Bauer turning up might have been a help, and I love the idea of Chloe furrowing intently in the background as things go wrong. Er, I digress…] The idea of tormented pupils getting together, years later, for revenge on their teacher is a good one. Doesn’t need much more than that to work, and perhaps the best scene has a pupil calmly revealing her hatred, as she takes the teacher for a stroll by the edge of a cliff. However, the writer decided to slap on a bunch of superfluous threads, such as the teacher’s deformed son. They’re unnecessary at best, totally implausible at worst, and derail the film well before the end.