Is this horror? We didn’t think so when we read the synopsis, which made it seem more like a romantic drama. I mean, judge for yourself: “A misogynic photographer discovers for the first time in his life the joys of loving a woman, this one confused about her self-identity and self-esteem, by helping her in her perceptions of herself with his photographic retouching skills.” That isn’t wrong. But it’s far from the whole story. There’s a significant feeling of Cronenbergian body horror here, with elements of both Crash and, especially, The Brood. Though subtlety is very much the order of the game here: this is, literally, skin-deep. 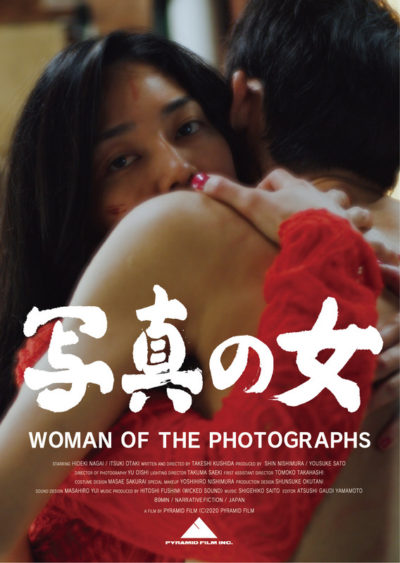 The photographer in question is Kai (Nagai), who has a studio and also tweaks photos to order, making the subject look younger, prettier, or whatever. I’d say he seems generally anti-social, rather than particularly misogynistic. He prefers insects to people, going on trips to the countryside to shoot photos of them, and keeping a praying mantis as a pet. It’s on one such jaunt, he bumps into Kyoko (Otaki), a former ballerina who is now an “influencer,” who posts daily on social media. She has suffered an accident, and he helps her get back to the city, tending to her wounds. Kai then starts work fixing her photos, to erase the damage resulting from the rural incident. However, Kyoko discovers when she posts untouched pics, they are the ones which get more of that crucial engagement. So when her scars begin to heal, what’s a social influencer to do?

Considering that Kai doesn’t say a single word until almost the very end of the film, this is still quite a thought-provoking movie. The main topic appears to be whether beauty is something inherent, or is it only present when it’s acknowledged by an outsider. Does the approval of others matter? Or is it what you yourself think that is important? Fortunately – since Kai isn’t exactly loquacious on the topic (or any other) – two other customers, Saijo (Inomata) and Hisako (Koinuma) engage in the conversation, and help propel it forward. To quote the latter, “Even if a man thinks I am different from my photo when we first meet, the man may make my true self closer to my image”.

In other words, the fiction of a retouched photo, can modify the reality of its subject, a remarkably creepy concept when you think about it. This is where The Brood fits in, with its concept that strong emotions can trigger physical changes (“The shape of rage”). Here, the idea is that the reactions of others can also trigger a change. It does tiptoe around the edges of horror. The number of close-up shots of Kai’s pet eating, meant I would not have been surprised had the film ended in Kyoko killing and cannibalizing Kai, as female mantises do to their mates. [Issei Sagawa nods approvingly…] It’s not a spoiler to say, it doesn’t go there, though some imagery is quite raw. Aided by some stellar cinematography, this is one that will stick in my mind for far longer than expected.