My tolerance for a slasher movie that runs for 114 minutes, might have been greater had I not just watched an urban gangsta flick which ran 126 minutes. Neither of these movies came close to justifying the apparent need to emulate Christopher Nolan or a Bollywood musical. This would have worked just as well at ninety minutes, and probably better still at 75, and demonstrates, yet again, that having one guy write, direct and edit a movie is a recipe for self-indulgent problems. That said, the IMDb says this is Callaway’s tenth feature film. You would think he would have learned a bit more by this point, in particular about the perils of cramming too much plot and too many characters in, especially when you’re apparently scared to leave them on the cutting room floor. 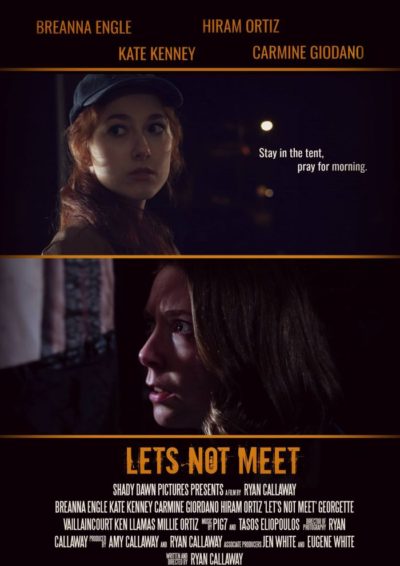 The central character here is Aya Becker (Engle), the prototypical ‘weird girl’ at high-school, who now delivers pizzas. Her last customer of the night proves problematic – and not in the “Leave a poor review on Yelp and stiff her on the tip” kind of way. No, instead it turns out to be a trap, from which she only just escapes, into a nearby forest. There, she meets up again with the other chunk of the plot. This is a group of friends who are camping in the woods, and to whom she had delivered pizza earlier in the evening. And what are the odds? For they, too, are being menaced by something unpleasant, and it turns out, there’s a connection to Aya’s predicament, as well as certain dark incidents in her past.

Let me get the positives out of the way first, for I could easily spent the remainder of these five hundred works enumerating the movie’s failures. Aya is a good character, rather different from the typical “final girl”, and Engle makes her genuinely likeable. When you finally get to see the movie’s monster, I must also say, it’s considerably better than I was expecting. Admittedly, I was expecting a remaindered mask from a Halloween shop, so this was a low bar to clear; however, it’s a decent piece of work.

Unfortunately, these hardly dent the negatives. Firstly, the whole “unseen terrors lurking outside your tent” thing has been a cliche since The Blair Witch Project, and that’s over twenty years now. It just doesn’t work for me. Then there’s the weirdly-edited dialogue, with odd gaps between sentences, which means the exchange rarely sound like a genuine conversation. The leisurely approach to pacing is obvious from the running-time, and is perhaps most notable at the end, which is the most stretched-out I’ve seen since Return of the King. You could skip the final 15 minutes, and not lose anything of true significance. If the film had simply focused on Aya and the escalating issues of her night, it could potentially have worked considerably better. Instead what we have here is a bit of a sprawling mess, that sorely needs some external restraint.