Low-budget filmmaking is largely about making use of what you have. In this case, what Perez had was a cave. Or, at least, access to one, because he worked (and still does, AFAIK) as a tour guide at Inner Space Cavern, in Kingsville, Texas. He apparently talked his bosses into letting him have the run of the cave complex to make his movie. But there was, apparently, a condition attached to their agreement: the entire cast and crew had to be Inner Space employees, to make sure the location was treated with the respect it deserved. I don’t know about your job, but if I had to make a movie under such a restriction, the results would be… not good. This, on the other hand, is quite serviceable. 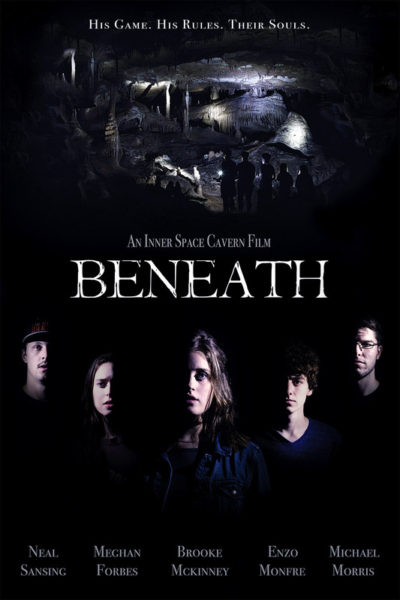 The story is, admittedly, barely a cliche. On Halloween night, five tour guides go into the cave to stage a demon-summoning ceremony which local lore tells, led to the death of a sacrificial victim years previously. What could possibly go wrong? To absolutely nobody’s surprise except theirs, the ritual works, and they are quickly being stalked relentlessly through a maze of twisty little passages, all alike, by Arkyn. He looks like a cross between Slenderman and the Silence from Doctor Who, and has the ability to mimic voices. This is used to lure away members of the group, to their ultimate doom, which involves having their souls ripped out through their eyes – offscreen, because budget.

I was relieved to discover that this is a remarkably well-lit series of caves. Having read it was filmed on a Best Buy camera powered by a camping generator, I was ready for something which could only be appreciated by bats. Fortunately, it appears the owners left the lights on downstairs, and you can see what’s going on. Certain low-budget movies, which confuse darkness with “atmosphere”, should take note. The performances are as much of a mixed bag as you’d expect. The leads are generally not bad, if anything erring on the side of underplayed. Vharacters are briefly yet effectively sketched, and I suspect most are largely being themselves, more or less. [I wonder if the guy playing the requisite asshole realizes this…] The same, regrettably, cannot be said for the likes of security guard Jerry, an apparent stab at comic relief, where emphasis should have been on the stabbing.

If there’s nothing new in the way things unfold, and the makers’ inexperience is occasionally obvious, this proved to be entirely watchable. Perez has clearly seen his share of cheap horror, and deftly skirts many of the common problems therein e.g. bad audio. If this never escapes its low-rent origins, and would have benefited from a less familiar script, it is still a great example of doing the best with what you can access. When life gives you lemons, make lemonade, or so the saying goes. And apparently, when life gives you a cave, make a horror movie.