Adam (Lane), Barret (Kelly) and Chris (Walker) are wannabe game designers, who have created the homicide-based board-game of the title. Getting it to market is a different matter, with their crowd funding attempt a dismal failure. They are then contacted by a mysterious benefactor (Cackowski), who invites them out to his cabin in the woods to discuss possibly selling the game. But their host ends up dead – killed in an unfortunate encounter with a bear-trap. And our heroes can’t exactly contact the police, their browser histories filled with “how to kill” searches, carried out as part of their game research. So, reluctantly, they decide there’s no option but to put their Internet acquired skills in body disposal to use. Only, things might not be quite as easy as Reddit would have you believe. Matters aren’t helped by the appearance of a cop, even if he turns out to be a big game geek as well. 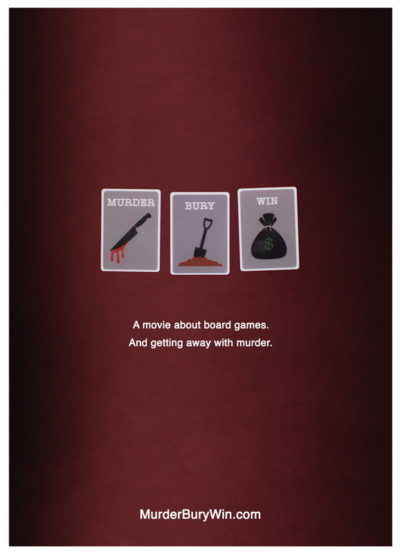 One senses there’s a fair bit going on beneath the surface. On face value, it’s a dark comedy/thriller, about murder and how to get away with it. The game industry and sites like Kickstarter also seem to be obvious targets (one of the games to which our heroes aspire is “Puppies on Fire”, presumably a nod to “Exploding Kittens”). But I suspect there are other dynamics at play. Two of the trio are black: while this is never explicitly referenced, it seems to be a factor in the way their relationship disintegrates over the course of the film. Adam, the white guy, while initially just a bit controlling, appears increasingly to possess sociopathic tendencies; at the other extreme, Barret refuses to compromise his moral scruples. Poor Chris is stuck in the middle, left trying to mediate – not always successfully. It does become steadily more clear that their game is all which truly unites them. Yet this is all handled subtly enough, that it never becomes the dreaded, “political polemic thinly disguised as a genre movie”. There are also thoughtful points related to game theory, with regard to collaboration vs. competition.

I would like to have seen the scenario more fully developed. Outside of the cop showing up, there’s not much in the way of tension from outside the group. It is also, of course, not the most plausible of concepts, and some aspects do require the audience to go along with it for the sake of the plot. However, the script does a decent job of selling the premise, and the three leads are all good in their roles. Their interactions have a natural feel, which help the film get past its weaker sections. On the technical front, especially strong is Jonathan Snipes’s score, which starts out sounding like a cover of Psycho Killer (not inappropriately!), but soon finds an original and interesting direction. While this may not be particularly ambitious and feels relatively “safe”, what this does, it does solidly enough to work.