While still every bit as ludicrous a concept, this one does build on the strengths of its predecessor, and addresses at least a few of the weaknesses. For example, although no-one will ever mistake the CGI here for Jurassic Park, they manage to avoid it looking embarrassingly bad, as happened on several occasions previously. And though set in supposedly the African wilderness (though I’m sure the makers never came closer to Africa than a Toto CD), they largely skip the obvious beasts of prey. The film starts with a group of poachers invading an animal sanctuary, only for the sedative invented by one of their number, Jezel (Strong) to work rather differently from intended. The survivors reluctantly find themselves having to team up with the sanctuary employees, led by Brooke Sullivan (Sturdefant) and her hunky deputy, the bizarrely-named Randy Hock (Buckley), to fend off the enraged fauna, while Jezel works on an antidote. 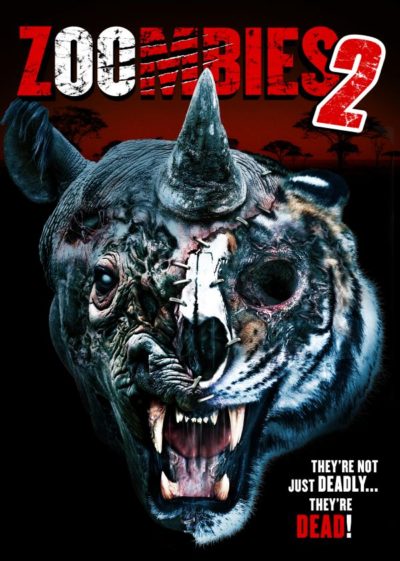 Need I say anything more than: “attack aardvark”? No, really. For one glorious moment, I thought they were going simply to work their way through the bestiary in alphabetical order:
“What’s next after aardvark?”
“I dunno…. Anteater?”
“Isn’t that the same thing?”
Sadly, it wasn’t the case. But as mentioned, rather than lions and tigers (and bears, oh my), we instead also get a mother-son pair of attack porcupines, and even attack meerkats (top). Yes, those cute little critters, beloved of BBC Wildlife documentaries, turn out to be rather less adorable, when they are attempting to rip your face off. And we do get a ripped-off face – though in the spirit of full disclosure, that’s due to a ‘pines attack, so don’t blame the meerkats. But are they all technically zombies? We’re still not sure. The sleeve seems to state they are indeed dead, but they never actually seem to cease to be.

As before, the humans are a largely uninteresting bunch when compared to our furry fiends, and are at their best when simply thrashing about, holding model animals to their faces and yelling. There’s quite a lot of this. Credit Chris for immediately spotting the reason for Brooke’s nausea, even if this doesn’t serve any significant purpose. I was kinda hoping her amniotic fluid would be the magic ingredient in the antidote or something. I did like the twist at the end, where the story suddenly links up with Zoombies, in a way that makes considerably more sense. I had been unjustly maligning it for being a sequel in name only, and need to apologize for that.

It does remain an idea which would benefit from considerably more resources than The Asylum can offer. In that light, this film is like watching Lionel Messi, playing out his contract with Slough. However, there seemed to be fewer dead spots and more energy, meaning I looked at my watch considerably less than in the first installment. Maybe they’ll do Zoombies 3 in a petting zoo, with attack lambs and attack hamsters. We can but hope.