I have not seen The Slashening, the 2015 film to which this is a sequel. But that probably doesn’t matter, not least because this opens with a “campfire story”-style recap of the murderous events which its title suggests. A recap which, naturally, turns into a bloodbath of its own, with the masked killer from that movie, apparently not as dead as everyone though. This is my unsurprised face. We then move from Long Island into New York City, where Madison (Weyrich), a survivor of those events, is trying to put her life back together. To that end, she has joined a very strange support group, which does include one other traumatized Slashening victim. And, by “traumatized”, I mean getting an eye gouged out and his dick cut off. But it’s not long before members of the group start turning up dead, and Madison’s nightmare begins all over again. 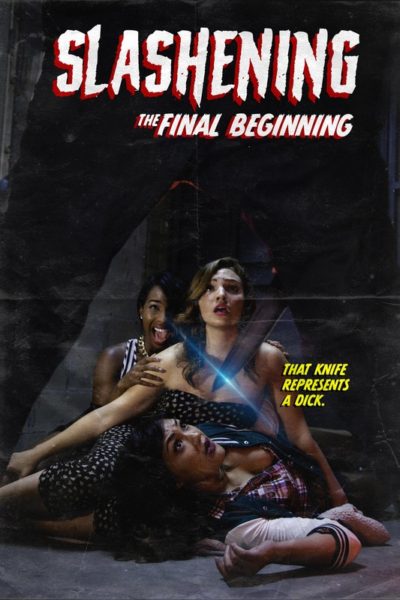 The above doesn’t quite capture the spirit of this, which is probably 40% slasher movie parody, 40% social satire and maybe 20% actual horror. It’s certainly not for the easily offended, kebabing all manner of sacred cows, as you’d expect from a Troma production [Lloyd Kaufman cameos, as a rather unconventional martial arts master – though his advice eventually turns out to be highly effective]. You will see things you have not seen before. Or if you have, I don’t want to know about it. Though, perhaps oddly, I’m not talking so much about the actual killings, which are surprisingly low-gore, with a disappointing amount of off-screen work. I did enjoy the “death by bong impalement”, however.

There are elements which feel like an entry in the Scary Movie franchise. That’s especially so during the opening, where we get the killer being frustrated by a couple continually turning the light on (top), or advised by a victim on the best way to ignite his gasoline-drenched form. Yet others are more cerebral, poking fun at the #MeToo movement or “empowering” modern art. There are even a couple of quite startling cinematic moments, such as the scene at an art gallery which unfolds in a single shot. as the camera does about a 2,160-degree rotation; or the split-screen slasher-vision sequence. However, it also shares Scary Movie‘s uneven nature. For every gag which triggers a laugh (whether genuine, or of the “That’s just wrong…” kind – and the split is pretty even), there’s another that’s a swing and a big miss.

All told though, it manages a decent pace, with few dead moments. So if something doesn’t tickle your particular funny bone, there’s usually an alternative quickly along to replace it. You’ll probably need at least some awareness, of the kind of films at which it’s poking fun. And, I stress again, the thin-skinned should steer well clear – or perhaps even those unaware of what “docking” means as a sexual term. Or “hot-dogging”. And those are not even the most startling genital-related moment. Let’s just say, some things, once seen, can never be unseen…