The concept of zombie animals isn’t a new one. You could make a case it goes back to 1964’s Last Man on Earth, with Vincent Price’s infected dog, though you can also argue whether the creatures there are vampires. The first I remember was the undead poodle in the otherwise forgettable The Boneyard from 1991. There was the zombie Doberman in Resident Evil (one of the sequels added zombie crows), and of course, Zombeavers. But these are really side-lights. This may be the first case where a range of different animals are infected, and humans aren’t. Though, again, here it’s not clear whether the victims die and come back, or if we’re in a 28 Days Later situation, where they’re just hyper-aggressive. 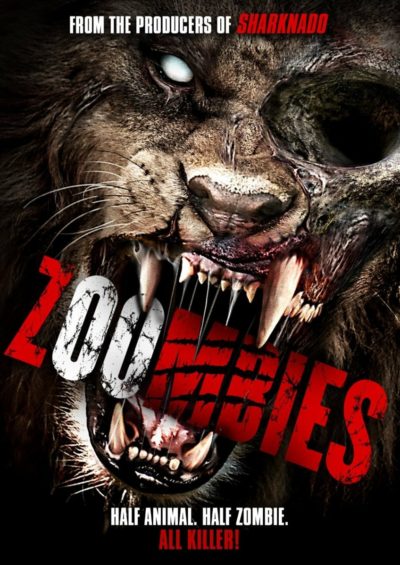 While it’s a great idea, this is one of those Asylum movie where a lot of the potential gets left on the table, either due to cost or simply sloppiness. The outbreak at the Eden animal park starts when a monkey is injected with a serum; after killing their captors, they then escape, infecting other animals in the park. The focus of the humans is in protecting the aviary, because if birds are infected, they could fly out of the park [remember that sloppiness? Never mind the fact the monkeys could very easily escape by climbing through the gate]. However, the budget isn’t up to the ideas, with some painfully bad green-screen effects, such as when actors are riding on obviously non-existent elephants.

This is at its best when avoiding more obvious fauna, e.g. lions and gorillas (a guy in a suit), in favour of less threatening creatures. The attack giraffes were fun, but the peak is when Thea (Nestor), the little daughter of park director Dr. Ellen Rogers  (Nielsen) has to fend off a vicious koala. While we don’t see the resulting battle – damn those limited resources! – simply cutting back to the adorable moppet,  now blood-spattered and wielding both  thousand-yard stare and dripping baseball bat, is peak Asylum. More of that would have been welcome. For one glorious moment, I thought we were getting attack ducks. Sadly, we were denied that pleasure – though I did later get to quote a number of lines from Monty Python’s parrot sketch.

The humans generally fare a bit less well, though Butler makes a decent impression as security guard Lizzy, who appears to be auditioning for a job as Lara Croft’s stunt double. Save those mentioned previously, they’re a bunch of interchangeable and largely dislikable fodder. We don’t even get the satisfaction of seeing them get torn limb from limb, once more, the budget only extending to off-screen carnage. It all builds to a finale which is obvious from 15 minutes in, when you hear the line, “I want you to go down to the basement and  take inventory of all the gas and methane tanks.” You just know it’s going to end in a giant fireball, and cutting to a shot of the survivors simultaneously flinging themselves to the ground. In that area, at least, the film does not disappoint.