What’s Canadian for “rednecks”? You might be forgiven for wondering after watching this, which takes the kind of “psychotic family” horror film, typically set in the American south, and re-locates it to…  Ontario? But aren’t Canadians supposed to be all polite and stuff, rather than doing this Ottawa Chainsaw Massacre shit? Well, I guess you haven’t heard of Paul Bernardo and Karla Homolka, whose activities are probably unfilmable. But this does apparently demonstrate that inbred degenerate madness knows no national boundaries. 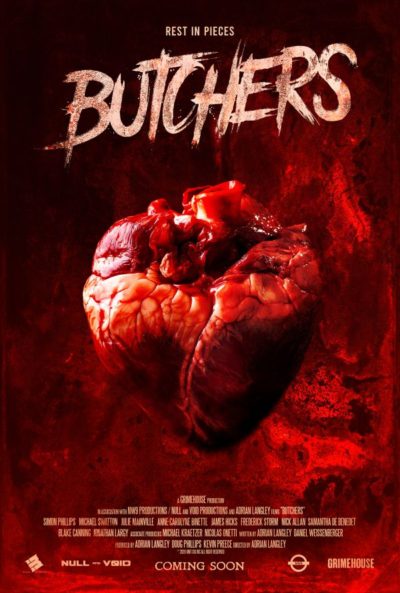 It takes place in 1998, a more innocent time before the existence of cellphones made horror movies complex. Two young women (Mainville and Binette) and their boyfriends, are driving through the countryside, when their car breaks down. One couple strikes out in search of help; the other stays with the car. Both soon run into trouble, in the shape of the Watson brothers, Owen (Phillips) and his drooling cretin of a younger brother, Oswald (Swatton). They own a local garage, but have a sideline in kidnapping passing travellers – particularly the young, pretty women – and keeping them chained up in the barn for… Well, if the title’s not a big enough clue, let’s just say the phrase “We’re having you over for dinner” takes on a bit of a different meaning, when the Watson’s are doing the inviting.

On one level, there’s nothing particularly new here. This is the kind of rural nightmare which has been inflicted on visiting city-folk for close to five decades, since Tobe Hooper first revved up the ol’ tree-trimmer. As an animated teapot once warbled, “Tale as old as time, true as it can be.” And just as a film can be based on an 18th-century fairy-tale and still succeed, this goes to show that what matters in horror is less originality than execution. A well-trodden path can still be entertaining, if it’s done with energy and commitment. And there’s no doubt Langley and his cast should be committed, hohoho. A little like TCM, it’s not an absolute gorefest. Yet the violence packs a undeniable wallop, thanks to its depiction – not least the audio aspects. It’s a very… crunchy movie.

There are a couple of novel angles. For example, what the fuck is that thing they are keeping locked up in the barn? The mere sounds it makes are the stuff of nightmares, and I must confess the eventual revelation is one of those cases where leaving it to the imagination might have been slightly more effective. Overall, though, it’s a very solid exercise in the generation of goosebumps on your arms, driven by a couple of memorable performances from Phillips and Swatton, balanced nicely by Mainville and Binette as their victims. There’s a good sense of pace as well, creating a slowly building sense of unease, until we’re ready for the grand finale. Guess those plans for a touring holiday of Canada will be going on the back burner for a bit.