Skiba is an Arizona director, who started off making B-horror flicks locally, and so we’ve been aware of him for a while. Indeed, that goes back to his debut with Blood Moon Rising in 2009, which is basically what it sounds like. It therefore comes as a bit of a surprise to find him attached to this Lifetime TV movie, and discover it is where he has apparently found a niche, making movies like My Adventures With Santa. Do not hold your breath waiting for a review of that one here. But, hey, who are we to judge? You take the work you get in Hollywood. 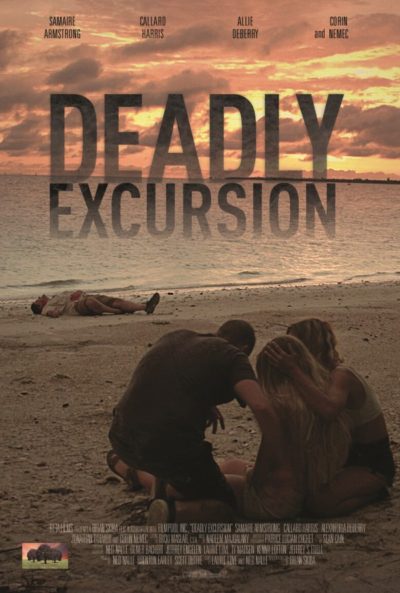 Certainly, this is competently directed, with the obvious flaws being much more in the script. Though, again: Lifetime TV movie. The label comes with a certain set of expectations, and the story here seems more intent on meeting those than challenging the viewer. This is a “mother-daughter in peril”TM flick, with Samantha McCarthy (Armstrong) and her daughter, Ellie (DeBerry) on holiday in the Florida Keys. They accept an invite from the Ruggedly Good-LookingTM Javier LeBlanc (Harris) for a day’s sailing on his boat, not realizing he’s a drug dealer whose boss has demanded he find a white woman to be his bride. Sam and Ellie offer a nice 2-for-1 special. But Estranged HusbandTM David (Nemec) is concerned, and travels down to see what’s going on.

To be fair, he may or may not be estranged; the film isn’t clear, since David is more a side-light until the very end. Most of this is about the two women making a series of poor decisions, and consequently staggering from one perilous situation to the next, while pulling a series of amusing faces. Their situation is enhanced by cellphone coverage which has apparently read the script, and so knows exactly when to work, and when to cut out in a hiss of static. Mind you, they don’t apparently even try to use the boat’s radio to call help. Instead this Brains Trust opt to phone David and leave a message, rather than calling the police or coastguard, then leap off the boat to head for an island, where more peril awaits.

Yeah, quite how Ellie managed to get accepted into college with this level of intelligence escapes me. I suspect Mom must have pulled a Lori Loughlin. In the film’s favour, once things kick off, it does keep going at a solid pace, and bonus points are due for creative use of pufferfish venom. Just remember: he who sets the syringe of toxin gets the syringe of toxin… However, it’s not really until the half-way point that this happens, and the soundtrack has completely spoilered Javier’s role as the villain, with music which swells ominously every time he appears on screen for the first 45 minutes. This glaring obviousness sinks Excursion as cinema, though as a TV movie, it is perhaps somewhat better than most.