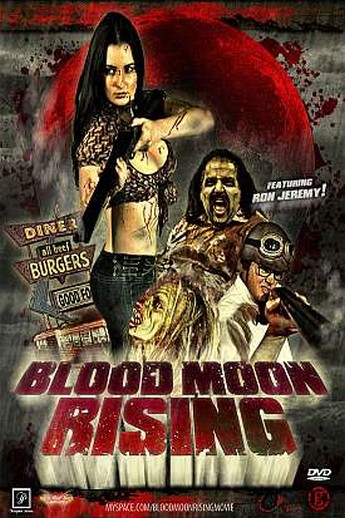 Since 1889, cursed lovers, Tristan (Walker) and Rachel (Foreman), have roamed the Earth looking for a way to end their misery as a vampire and werewolf. Only during an eclipsed blood moon can they see each other’s human forms renewing their love. In the year 1969 they put an end to their agony only to have it soiled by Tristans jealous wife and daughter of the Devil, Lucy (Love). Back from the grave and still hot from hell, her plan goes beyond revenge. She seeks to rule Earth with the army of hell. The only person who can stop Lucy is her great-great granddaughter Sadie Hawkins (also Love). I copied the above just about straight from the synopsis. Exposition is not really this film’s strong point, and much of the preceding detail is less than clear. Long story short: zombies, werewolves, vampires, Sadie and comic-book geek Darrel (Trout) and a selection of weapons, much arterial squirting and pseudo-period atmosphere [it’s set in 1969], as our hero and heroine try to stop all hell breaking loose – literally.

I think this originated as a short, and occasionally that peeks through, as the movie’s focus swings about from one place to another with reckless abandon. It starts off as a straight zombie flick, goes through a lengthy flashback telling the love-story of Tristan and Rachel and ends up in psychedelic Satanica. The style is clearly inspired by Grindhouse, with missing reels, splices and hair on the lens, and suits the movie very well. The effects are good enough for a low-budget film, more than making up for in enthusiastic spray what they may lack in polish [occasionally looking like a Halloween store was involved, shall we say]. Love is particularly worthy of mention in her twin roles as hero and villainess; it took me some time to realize it was the same actress, her performances are so radically different. While the pacing does drop off in the middle – full disclosure, Chris fell asleep – I found enough going on the rest of the time to make for a more than satisfactory B-movie experience. Just go with the flow, and don’t try too hard to follow what’s going on.