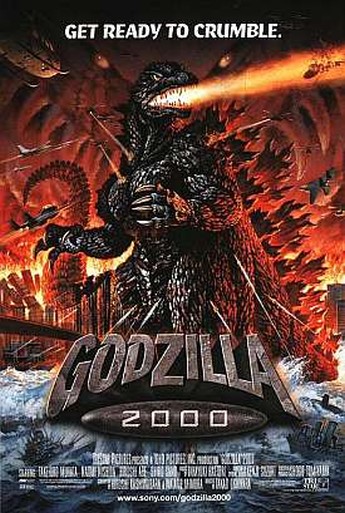 After Roland Emmerich did his level best to destroy the franchise with his Hollywood version, Toho decided that they’d better restart things from their end and made the first of what’s known as the “millennium-era” monster movies. In it, the antagonist is a giant meteorite, recovered from the bottom of the ocean – when exposed to sunlight it turns into a giant UFO, with designs on converting Earth’s atmosphere into something breathable. Naturally, there’s only one hope for our planet. And, at the risk of spoiling things, it isn’t the Godzilla Prediction Network, an independent body headed by Yuji Shinoda (Murata) who are devoted to tracking…well, take a guess. Though how hard can it be to track a 250-foot tall, radioactive lizard that breathes fire? Nor are the governmental group, the Crisis Control Institute, much better, under their leader Katagiri (Abe). Oh, they have spiffy equipment and all, but you can guarantee, if there’s a way to screw things up, they’ll find it: guess who was responsible for lifting the meteorite? They want to destroy Godzilla, having apparently not learned that human weapons only irritate it. Fortunately, the big G is not one to hold a grudge, and as always, is in our planet’s corner when the chips are down.

They should have just abandoned the entire human element here, because it’s nothing more than tedious padding that has no function. One group of scientists are the cliched amateurs, along with a highly-irritating journalist, who serves even less purpose; the other are the equally-stereotypical government villains, whose reaction to anything they don’t understand usually involves armor-piercing missiles. Yawn. Even Godzilla is bored by it all, and vanishes for about 40 minutes in the middle of the movie, to regenerate after getting his scaly ass kicked by the UFO [I also note that no explanation of Godzilla is even offered; he’s now as much part of the landscape as the frequently-destroyed Tokyo Tower]. However, then he comes back, and the film gets into what you’ve been wanting to see: a full-on monster mash, with the city, as usual, getting the worst of it. This is great, though the UFO is not one of G’s most memorable opponents – it does still possess a sting, shall we say. There’s still absolutely nothing like the site of two giant rubber-suited creatures going at each other, hammer and tongs. Shame about the rest of the flick.